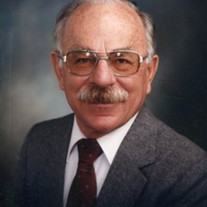 Reunited Richard H. Kennedy (Dick), 93, of Dillon, Montana, died of a broken heart.  We almost lost him when the love of his life, his wife Alice, died ten years ago. It was only for the sake of his children, grandchildren, and those who loved him that his heart kept on beating.  His continued presence enriched our lives through his wit, wisdom, and wonderful remembrances of Alice.  When his heart finally stopped, on October  7, 2014, we truly lost a remarkable man, one of the best of the greatest generation. Dick was born in Glendive, Montana, on March 28, 1921, to Richard and Wilma Kennedy. Dick was an outstanding athlete and an accomplished musician.  While in high school, he was twice selected as 1st chair-1st clarinet for both the Montana All-State Band and the All-State Orchestra.  He later played clarinet and saxophone in Dixieland Jazz bands in Glendive, Cody, and Dillon. It was in Glendive that Dick first met the beautiful Alice Scheitlin, who became the love of his life.  They were married in Dallas, Texas, on June 2, 1945.  After enlisting in the Army, Dick was selected to go through Officer Candidates School.  He managed to â€œbluff his way throughâ€ (his words) and was commissioned a Second Lieutenant.  After his discharge, Dick worked for the Bureau of Reclamation for 34 years.  His first job for the Bureau was in 1945 in Cody, Wyoming.  He and Alice first lived in the old barracks at the Heart Mountain Japanese Internment Camp  outside of Cody.  A few years later, they moved down the road to a homestead where, in addition to working for the Bureau, Dick farmed alfalfa.  In 1960, he and the family moved to Dillon so he could work on the Clark Canyon Dam Project.  Before he retired from the Bureau, he was relocated to Great Falls and then to Billings. During his years with the Bureau, Dick was selected to work in Bogota, Columbia, for 5 months during the 1960s.  He was also selected to represent the Bureau at the East-West Center in Hawaii.  He taught representatives from New Zealand, Australia, Formosa, the Philippines, and other countries in the process used in the United States to transition an irrigation project from the government to the water users. After retiring from the Bureau, Dick became the manager of the East Bench Irrigation District in Dillon and served in that capacity for 15 years.  In 1968, he was entered into the Congressional Record for his accomplishments with the East Bench Unit. Dick was president of the Beaverhead Country Club in the early 1970s and was an active member of the Kiwanis Club and the Elks Club for over 30 years.  For many years, Dick was a cantor and a member of the choir at St. Rose of Lima Church. Dick is survived by his 5 children:  Robert Kennedy in Alexandria, Virginia; Kathy Gilroy (Mark,  d. 9/13/2014) in Polson, Montana; Karen (Bob) Kabrich in  Scottsdale, Arizona; Kelly Kennedy in Studio City, California; and Susan (Don) Sommerfeld in Billings, Montana;  and 7 grandchildren and 5 great-grandchildren. A Memorial Service will be held at 2:00 on Saturday, October 25, at the Brundage Funeral Home in Dillon followed by a reception at the St. Rose of Lima Family Center.  In lieu of flowers, memorials may be sent to The Dick Kennedy Kiwanis Park Improvement Fund and Honor Roll Memorial  (at Kiwanis, P.O. Box 405, Dillon, MT  59725) or to Barrett Hospital Hospice (600 Hwy. 91 So, Dillon, MT  59725). Dick will be greatly missed by all of his family and many, many friends for his gentleness, his intelligence, his work ethic, and his sense of humor.  On Dickâ€™s behalf, his family thanks the Dillon community for the love and friendship they have shared with him. His family knows that Dickâ€™s heart is finally whole again, beating joyfully, as he embraces the love of his life, Alice.   $(document).ready(function(){ });

Reunited Richard H. Kennedy (Dick), 93, of Dillon, Montana, died of a broken heart.  We almost lost him when the love of his life, his wife Alice, died ten years ago. It was only for the sake of his children, grandchildren, and those who loved... View Obituary & Service Information

The family of Richard "Dick" Kennedy created this Life Tributes page to make it easy to share your memories.

Send flowers to the Kennedy family.