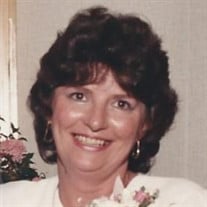 On April 27, 2020, Phyllis J. Wetzsteon, devoted wife of the late Herald (Hal) Wetzsteon and mother of four children, took her last breath on earth and her first one in heaven. She was born to Ernie and Ellen Simmons on November 30, 1943, in Hamilton, Montana. She was raised in the home her grandfather built and attended school in Darby, Montana. She has one sister, Dorothy who is a year older and, according to Phyllis, never let her forget it. She was taught at an early age how to cook, clean, respect and help others. In 1960, she was cooking for a hay crew on Edgar Wetzsteon’s ranch in Sula, Montana when his son Herald asked her on a date. They fell in love and were married in January of 1961. That summer she cooked for the fire crews fighting the Sleeping Child Fire. In 1962, daughter Cheryl was born. They moved from Sula to Hamilton where Hal took fire training and daughter Angie was born. A permanent Forest Service job brought them to Wisdom in 1965. Son Herald (Gordon) was born and two years later daughter Christy. Living in a 10x55 trailer house with four kids under the age of six kept Phyllis busy. Phyllis and Hal were inseparable for 47 years, from their early days on the ranch she loved in Sula, to the life they shared raising their family in Wisdom. She loved to fly fish and spent evenings and weekends with Hal and the kids on the creeks and river in the Big Hole. She would still cook for a crowd but preferred to be outside digging in the dirt, tending to her yard and her beloved sweet peas she could grow anywhere. Her love for classic country music started at eight years old when her father, who was a musician, taught her three chords on the guitar. Music filled her home and she loved to play and sing. Phyllis and Hal were fantastic dancers and often would follow a party outside to dance in the street. She was an accomplished seamstress and spent hours on the cherished sewing machine that Hal gave her. She was an active community member, serving in all clubs and as an EMT. Her door was open to everyone, friends for coffee and rousing games of pinochle, neighbors needing something mended, strangers seeking medical care or any kid who just needed somewhere to go. She felt lucky and blessed to be part of such a special place and time in Wisdom. Hal’s job took them to Dillon in 1987. Their new home was surrounded by dirt and weeds and after years of hard work, Phyllis once again had a beautiful lawn and flower beds. She was well known at the county fair for her prize-winning flowers. Phyllis accepted Jesus into her heart at a young age. She was actively involved in the Dillon Vineyard Church including the prayer chain and a sewing ministry. She was a devoted caregiver, caring for her husband, parents and father-in-law in their final days. Her hope was to make more friends than enemies and felt humbly blessed by all who came into her life. She said her greatest compliment was that she was simple. She loved God, her family and community and met life head on with prayer, strength and perseverance. Phyllis was preceded in death by her husband Hal, her parents Ernie and Ellen Simmons, and her in-laws Edgar and Helen Wetzsteon. She is survived by her daughter and life-long special companion, Cheryl Wetzsteon, daughter Angie (Ed) Coon of Dillon, son Gordon (Joetta) Wetzsteon of Twin Bridges, daughter Christy (Dow) Keyes of Wisdom, eight grandchildren: Rebecca (Paige) Shanks, Kelsee (Levi) Robertson, Kia Coon, Malcolm (Dana) Keyes, KC Keyes (Bryce Lane), Keith Wetzsteon, Danielle Wetzsteon, Nicky Wetzsteon, four great grandsons: Porter, Pryor, Jonithan, Griffin, her sister Dorothy (Roy) Mouritsen of Salmon Arm, British Columbia and many nieces and nephews. The family of Phyllis Wetzsteon invite you to an outdoor Memorial Service to honor and celebrate Phyllis on June 27, 2020 at 11 am at her residence, 2100 Rebich Lane in Dillon Mt. Please bring a lawn chair. A luncheon will follow. Phyllis asked that if it is on your heart to donate please give to someone you know in need.

On April 27, 2020, Phyllis J. Wetzsteon, devoted wife of the late Herald (Hal) Wetzsteon and mother of four children, took her last breath on earth and her first one in heaven. She was born to Ernie and Ellen Simmons on November 30, 1943, in... View Obituary & Service Information

The family of Phyllis J Wetzsteon created this Life Tributes page to make it easy to share your memories.

Send flowers to the Wetzsteon family.