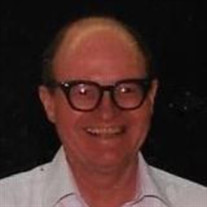 Philip R. “Ray” Giudici Ray was peacefully called home to the Lord on August 12, 2021 surrounded by his loving family. Born to Philip Isadore and Florence Nelson Giudici on May 26, 1933 in Dillon, Montana, he lived his early years in Dillon, Butte, Sandpoint, Idaho and Portland, Oregon. The family eventually returned to Dillon in June 1943 where he remained until graduating from Beaverhead County High School in 1951. Subsequently, he attended Idaho State College earning a Certificate of Carpentry prior to being drafted into the Army on April Fool’s Day 1953. After his service, Ray returned to Dillon and began his 39-year telephone career as a lineman and installer with Mountain States Telephone Company. A devoted man of service to both country and community, he joined the Montana Army National Guard in 1975. He served in several capacities as a cook and as an M1A1 tank commander attaining the rank of Sergeant First Class prior to his retirement in 1993. He was also very active in the local chapter of Kiwanis, Elks (serving two terms as Exalted Ruler), and the American Legion (particularly the Medical Supply Program and Honor Guard). Ray very much enjoyed supporting and attending sporting events of the Dillon Beavers and UofM Western Bulldogs. He was preceded in death by his parents, his loving wife of 49 years Dalene, and grandson Blaise Riebe. Survived by his sister Carol, son Craig (Michelle), son Bryan (Kimberly), daughter Kathy (Russ), and son Daniel, nine grandchildren, 14 great grandchildren, and numerous nieces and nephews, he undoubtedly will be dearly missed by his family and friends. There is a celebration of life ceremony for both Ray and Dalene who passed away in December of last year on Tuesday, August 17th at 3 PM at St. Rose of Lima Catholic Church in Dillon.

Philip R. &#8220;Ray&#8221; Giudici Ray was peacefully called home to the Lord on August 12, 2021 surrounded by his loving family. Born to Philip Isadore and Florence Nelson Giudici on May 26, 1933 in Dillon, Montana, he lived his early years... View Obituary & Service Information

The family of Philip Ray Giudici created this Life Tributes page to make it easy to share your memories.

Send flowers to the Giudici family.