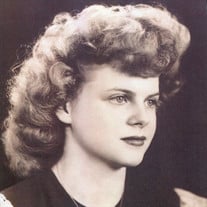 Patricia Mae Saling Hunt Miller passed away on March 14, 2018 at Pioneer Rest Home in Dillon, MT. Mom was born on Sept. 9, 1929, in Gresham, OR, to Edmund (Ted) Saling and Georgia Beck Saling. She was raised in Estacada, OR, along with her younger sister Donna (Saling) Bledsoe. She attended school in Estacada until her graduation in 1947. Mom was an accomplished pianist who also played the saxophone in the high school band. She was also the drum major and a cheerleader during her senior year. While a senior in high school, she dated and later married Rarold Dean Hunt, a recently discharged U.S. Marine from Eagle Creek. They were married in July after Mom’s graduation. Our brother Doug was born April 11, 1948, and our sister Marcia was born on May 7, 1949. Tragically, “RD” died in June of 1949 following a motorcycle accident. Mom worked for a local dentist, raising her family’s two children alone until she met Robert C. Miller, a heavy equipment operator from Iowa in 1950. She and Dad were married on February 9, 1951, beginning a life of travel and trailer house living until Dad’s death in 2007. Robert Michael (Mike) was born February 15, 1952, in McMinnville, OR, and the twins Terry and Sherry were born October 20, 1954, in Grangeville, Idaho. The folks moved from project to project until settling in Plains, MT, in 1967, where the last three kids graduated high school. They moved to the Lower Lynch Creek property in 1977 and built a home. Mom had a large garden, both for flowers and for the produce. She and Dad kept an amazing lawn and property. Mom and Dad were proud members of the Grange and the VFW organizations in Plains; Mom was the auxiliary president a number of times over the years. Mom also was a member of the Eastern Star, and played the piano and the organ for the Methodist Church. She was famous in and around Plains for her vast doll collection; Mom made the outfits for the dolls and even painted some of the faces. She made beautiful knit blankets, Afghans, and sweaters which were presents for her family and friends. Mom had raised miniature poodles, but finally gave them up after Dad’s death. Mom was preceded in death by her parents Edmund and Georgia Saling, her daughter “little Sis” Sherry, and her husbands, Rarold Dean Hunt and Robert Claudius Miller. She is survived by her daughter Marcia Hagenbuch (Chris) of Grangeville, ID; and her sons, Doug (Diane) Hunt of Sisters, OR; Terry (Virgina, deceased) of Renton WA; and Mike of Dillon, MT; and her sister Donna (Jack) Bledsoe. She is also survived by 11 grandchildren, 18 great-grandchildren, one great-great grandchild, and eight nieces and nephews. Before her five-year stay in Dillon, Mom had three great years in Bakersfield, CA, with Lorenz Johnson, an acquaintance from her high school years. “Ole” made Mom very happy in those years; he survives as well. Uncle Jack and Aunt Donna cared for Mom as well before her return to Montana. Our family extends it great thanks to the staffs of Parkview Acres Kindred Healthcare (now Pioneer) and the Renaissance both in Dillon, and the Libby Lodge of Love which all provided the best of care for Mom in her last years. We also would like to thank the medical personnel in Dillon (especially Dr. Anna Loge) who cared for Mom’s medical needs over the last five years. Brundage Funeral Home under the direction of Julie Briggs, is in charge, of funeral arrangement; we thank Julie for her care, compassion, and comfort during this tough time. A big thank you to Father Pascal for his caring service to mom through the years and during her passing. Cremation has taken place, although no services are planned at this time. Mom will be interred in the Plains Cemetery alongside Dad and Sherry in the veterans section at a later date.

Patricia Mae Saling Hunt Miller passed away on March 14, 2018 at Pioneer Rest Home in Dillon, MT. Mom was born on Sept. 9, 1929, in Gresham, OR, to Edmund (Ted) Saling and Georgia Beck Saling. She was raised in Estacada, OR, along with her younger... View Obituary & Service Information

The family of Patricia Mae Miller created this Life Tributes page to make it easy to share your memories.

Send flowers to the Miller family.