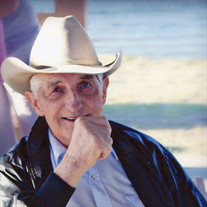 Robert Neil Strozzi age 88 passed away peacefully at his home surrounded by his beloved wife and children in the early morning hours of June 11, 2021. To the end, he retained his sense of humor, wit and incredible love for his family. Neil was born the second of three children to Robert and Beatrice (Simon) Strozzi on October 16, 1932. He, his Sister Virginia and younger brother Donald grew up on Roberts Street in Butte, MT. He attended Emerson Grade School, Butte High and graduated from Whitehall High School in 1951. At 15, Neil was given the responsibility of running the family ranch in Whitehall while attending high school. He was well known for his willingness to lend a hand to neighboring ranchers. His love for agriculture began at an early age and continued throughout his life. On October 25, 1952 he married his high school sweetheart and lifelong love, Betty Ann McArthur. Together they were blessed with six children Terri, Gary, Kathleen, Jeff, Tim and Shawn. In 1965 they settled to raise their family in Dillon. He was active in the community and enjoyed family and close friends. Neil was very involved in all his children’s activities, often traveling out of state for various events. He looked forward to large family celebrations and gatherings. He enjoyed many adventures of hunting and fishing in Montana as well as a good game of golf. His interest in Beaverhead County High School athletics led Neil and Betty Ann, along with many other parents to form the “Beaver Booster Club”. After moving to Dillon in 1965, he eventually became a partner in Dillon Livestock Market. Later, the partnership dissolved and he retained the Fertilizer Plant that became Dillon Fertilizer Company. Neil took great pride in working and helping his many farming and ranching friends throughout southwestern Montana. Neil retired in 2002 and remained an active member of the Dillon community. Neil was preceded in death by beloved family members, parents Robert and Beatrice, sister and brother-in-law Virginia and Angelo Petroni, brother Donald Strozzi and daughter Kathleen. He is survived by his loving and devoted wife of nearly 69 years Betty Ann, children; Terri (Rick) Smith, Gary (Deborah) Strozzi, Jeff (Mary) Strozzi, Tim Strozzi (Lori Ryan) and Shawn (K’Lee) Strozzi. Grandchildren; Shauna (Tom) Brewer, Lacey (Dallas) Rasmussen, Breanne Smith (Jared Potter), Dianna (Manuel) Garcia, Michelle (John) Aquino, David (Melissa) Strozzi, Jacob McConnell (Lisa Hankinson) , Chase (Melissa) McConnell, Jordan (John) Rausch, Lindsay Strozzi (Frank Walsh), Kyle (Chloe) Strozzi, Tanner Strozzi (Ember Veitenheimer), Riley Hart, Kallie Strozzi. Great-Grandchildren; Jessa, Trey, Hunter, Sam, Isaiah, Georgia, Shellanne, Dominic, Stacia, Allie, Thayden, Paxton, Lily, Jameson, Emma, Makayla, Elijah, Khloe, Lennon, Steele, Kendall Betty and Kash as well as numerous nieces and nephews. Per Neil’s wishes, there will be a private family gather to celebrate his life at a future date. In lieu of gifts the family wishes donations be sent to Barrett Hospital Hospice. We would like to extend our sincere thanks to the staff of Barrett Hospital Hospice and special friend Maris Love for their loving care during this time. Neil will be remembered for his many stories, love of dancing, his humor and all outdoor activities.

Robert Neil Strozzi age 88 passed away peacefully at his home surrounded by his beloved wife and children in the early morning hours of June 11, 2021. To the end, he retained his sense of humor, wit and incredible love for his family. Neil was... View Obituary & Service Information

The family of Neil Strozzi created this Life Tributes page to make it easy to share your memories.

Robert Neil Strozzi age 88 passed away peacefully at his home...

Send flowers to the Strozzi family.