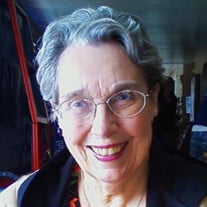 Nancy McConahay Peterson Bailey, 85 Nancy Bailey died peacefully on Sunday, July 10, 2016. She was born on November 6, 1930 in Salt Lake City, Utah to Jessie (Stewart) and William C. McConahay. She graduated from East High School in Salt Lake in 1947. In 1951, she earned a bachelor’s degree in earth science from the University of Utah, where she met Robert C. “Bob” Peterson. They married in 1952 and went on to have four children. Bob’s work took them to Grass Valley, California and Danbury, Connecticut, where Nancy taught earth science in a local junior high school. In 1964, the family moved to Anaconda. Bob died in 1970, and then Nancy attended Western Montana College, earning a master’s degree in education. She taught for a number of years at Washington Elementary School. She married Jerald “Jed” Bailey in 1974 and concluded her teaching career when Jed retired from the Anaconda Company in 1980. Jed and Nancy spent many joyful years traveling around the country, visiting their children and grandchildren, and pursuing their goal to take a photograph of every capitol building in the 50 states. They purchased property in Beaver Dam, Arizona, where they spent their winters golfing and exploring the region’s pictographs and casinos. Summers were spent outside of Anaconda in a beautiful setting on Warm Springs Creek they called their “camp,” where she loved to entertain family and friends. Nancy’s life was filled with caring for others. She was a devoted wife, mother, stepmother, and grandmother. She and her brother, Bill McConahay, dedicated many years to caring for their aging parents. She also supported Jed during a long battle with cancer. She was full of grace; whenever a family member was in need, she gave freely of herself in any way she could. Nancy had a thirst for learning, and a great curiosity about the world and the people in it. She loved to read and she hated to cook. She was warm, she was present, she knew how to listen, and she never judged. When Nancy told a story, she provided foreground, background, and footnotes—all before the tale was told—because she cared so much about doing justice to the characters of the story, who were always people she loved. Nancy was preceded in death by her parents, her brothers Roy and Larry McConahay, her husbands, and her daughter Jessie (Bob) Jacobson. She is survived by her brother, William McConahay of San Antonio, Texas, her daughters Laura (Neal) Straus of Dillon, and Polly Peterson (Gary Shelton) of Anaconda, and her son William “Bill” Peterson, also of Anaconda. Additional survivors include numerous stepchildren, grandchildren, great-grandchildren, nieces, and nephews. Nancy spent her final years at Renaissance South Assisted Living, and later at Kindred Parkview Nursing Home, both in Dillon, Montana. The family is deeply grateful for the loving support she she received from all of the caregivers in these facilities, including Drs. Karen Weed and Sandra McIntyre. A private graveside service will be held in early August in Salt Lake City. Services are direction of Brundage Funeral Home.

The family of Nancy J Bailey created this Life Tributes page to make it easy to share your memories.

Send flowers to the Bailey family.