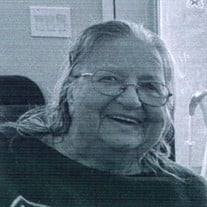 Mildred Joan Hayden joined her heavenly father on December 15, 2021. She passed away peacefully in the presence of her family in her home. Mildred was born on October 1, 1934 to Rosel and Afton Hyde in Boise, Idaho. She was the oldest of six brothers and sisters. She married Virgil Sheldon June 2, 1950 at the age of 15. They had Elizabeth born January 13, 1952. Virgil passed away June 13, 1954 in a boating accident. The twins Virginia and Virgilie were born October 13 1954. She married Glen Hayden on March 25, 1956. They had four Children Samuel on January 4, 1957, Lucy on March 5, 1959, Clyde on October 10, 1961, and Albert on December 22, 1964. She was a Jill of many trades. She worked on the family ranch. In 1969 she decided to finish her education and went back to school joining her daughter Elizabeth in her junior year of high school. In May of 1974 she graduated from Western Montana College. She was the first woman to graduate with an industrial arts degree. She also got a teaching certificate. She taught school for a couple years. She ran Skeets Cafe and the Bus depot. She worked at Ennis cafe. In 1993 she moved to Oregon where she worked as a prep cook and helped with the family trucking business. She also delivered papers for over 20 years. On October 9, 2016 at the age of 82 she decided that it was finally time to retire and spend her extra time with her family. Mildred loved spending time with her family. She liked to go fishing and playing pinochle. She loved her dogs and birds. She was preceded in death by her parents Rosel and Afton Hyde, brothers Rosel, William and Robert Hyde. She is survived by sisters Karen Wood and Gwendolyn (Bill) Palmer. Children Elizabeth (Dave) Williams, Virginia Sheldon, Virgilie Wheeler, Samuel Hayden, Lucy (Dennis) Swart,Clyde Hayden, Albert Hayden, numerous nieces, nephews, grandchildren, and great grandchildren. There is a memorial service scheduled for Tuesday, December 28th at 10:30 AM at the Church of Jesus Christ of Latter-day Saints in Dillon.

Mildred Joan Hayden joined her heavenly father on December 15, 2021. She passed away peacefully in the presence of her family in her home. Mildred was born on October 1, 1934 to Rosel and Afton Hyde in Boise, Idaho. She was the oldest of six... View Obituary & Service Information

The family of Mildred Joan Hayden created this Life Tributes page to make it easy to share your memories.

Send flowers to the Hayden family.