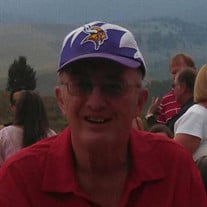 Michael Joseph Skradski Mike Skradski passed away the evening of September 7th after suffering from years of Parkinson's disease and his short bout with cancer. He fought a hard fight until the end, he was a fighter, and quitting was never an option for him in this, or any other aspect of his life. He taught us to always give a 110%, stand up for what we believe in, appreciate others, and to never give up. He was an inspiration to everyone who knew and loved him. Mike was born in Pueblo Colorado to Joseph and Nellie Skradski February 17, 1945, they later had his brother Bill who meant a great deal to him. His mother Nellie passed away September 6th, 1966 and left a big void in her family's life. Mike went to high school in Ely, Minnesota, and graduated college from UMD in Duluth Minnesota. In high school Mike played basketball and baseball and met our mom Kay, while working at the local movie theater. They celebrated their 48th wedding anniversary in Ely, this July, surrounded by friends and family. Mike spent many years in Silver Bay Minnesota, working for Reserve Mining Company. He later moved to Dillon, Montana to work at Barrett Minerals until his retirement. Mike was most proud of coaching his kids and their friends in various sports: baseball, softball, and basketball. He also taught us to play pool and played on a team with his family in Dillon for many years. He taught us, just like his dad taught him, to shoot like a winner. He said you can play a good game but "You gotta be a closer" and finish the game, more often than not as a winner, or at least a good sport. There were many times us kids heard "don't choke." Pretty much meaning, don't let the pressure get to you, you can do it, don't doubt yourself, you are a winner. He was always our greatest fan no matter what it was. When he found out he was dying he said," looks like I'm sliding into home," I guess he was safe and won the game. We were trying to think of a song that we could play that fit our dad, the best we would come up with was "Put me in Coach" by John Fogerty. Mike loved to bowl, play golf, watch sports "Go Vikings", fish, coach, Wheel of Fortune, Family Feud, Jeopardy (none of us ever knew the answer but, if we did we were a "genius!") and most of all family. He loved all of his Grandkids and was the best Grampa to all of them: Justin, Jaymee, Nariah, Quinton, Nathan, Maya, Damon, and last of all Jaxton, the baby of the whole family. He cheered them all on throughout life, from the smallest to their biggest accomplishments. He was their greatest fan and loved them all. Mike leaves his loving wife Kay, and children: Jodi Skradski Decker (Robert Decker), Shana Skradski, and James Skradski (Wendy Allen). In lieu of flowers, the family requests donations be made to Dillon Home Hospice or Parkinson's Research. Thank you to all who helped take care of our dad, you will be forever appreciated. Burial will be Saturday September 12th at 11:00 in Dillon, with a potluck reception BBQ at Barrett Park at 1:00 for anyone who would like to attend. If you have any questions you can call Jodi at 660-0488

Michael Joseph Skradski Mike Skradski passed away the evening of September 7th after suffering from years of Parkinson's disease and his short bout with cancer. He fought a hard fight until the end, he was a fighter, and quitting was never... View Obituary & Service Information

The family of Michael Joseph Skradski created this Life Tributes page to make it easy to share your memories.

Mike Skradski passed away the evening...

Send flowers to the Skradski family.