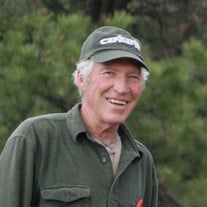 Michael Stephen Connors decided to take one final hike into the unknown on July 12, 2021. The cost of the many years of farming, building, and hiking in the sun finally was paid when melanoma came to stay. Mike was born in Sidney, Nebraska in 1951 to Harold and Evelyn Connors. As a child growing up in Greeley, Nebraska, Mike dreamed of traveling west to the mountains and building a home. His first stop on his journey west was Colorado State University, where he met his wife Joyce, who shared his dream of going further west still. After college, a fortuitous response from the Beaverhead Chamber of Commerce facilitated this dream. Mike and Joyce came to this community in 1976 and built their home nestled in the mountains. In Dillon at that time, party line phones still existed, there were only two doctors, and the eventual interstate ran through Sparky’s Garage parking lot and around the high school. Mike and Joyce enjoyed learning the area so much they decided to share it with others. They brought two sons, John and Josh, into the world and taught them a love of nature, life and the outdoors. The Connors family spent every moment possible exploring the public lands that are the heart of Beaverhead County. When the boys were too young to walk, they were carried across sagebrush hills looking for rocks. As the kids grew, the quartet forged their way through the thick forest to spend their days fishing and relaxing in high mountain lakes. Soon the top of the mountain peaks called, and the family met the challenge. Even after the boys began forging their own lives, the family would circle back together to explore the hills and mountains searching for antlers and the unknown. When not out exploring, Mike tended the woodland and field around his home. From seedlings the size of sticks he grew the great forest that now envelops the property. His farming roots shown through as he diligently watered and cultivated the land. The fruit trees and flowers, products of his persistence, now provide nourishment for birds, beast and man. This soft-spoken man was one of the structural beams supporting this community. He began his career as a journeyman apprentice for Lee Sturm. After this, Connors Carpentry was born, and the breadth of his work expanded. Many buildings, homes, and trails have his signature strive for perfection interwoven into their being. Look through the windows at University of Montana Western and you will see the graceful arcs in each piece of trim shaped and sanded by his hand. Descending the stairs at the library you can see where a thousand cuts turned oak boards into a masterpiece. When sharing stories at the brewery rest your arms on the reclaimed fir beams he merged to create the bar. Mike took pride in doing jobs for many of the seniors in our community. He knew that many did not have the means to have their homes repaired, so he did the jobs for his little old lady friends for what they could afford. Many times, payment came in the form of cookies, chicken soup, or a sincere thank you. Mike disliked two things in life, cucumbers and hypocrites. His sense of purpose, honesty, and integrity drove everything he did. “Do things so you never have to look back,” was some of the parting wisdom he left to his sons and grandsons. Our many miles may bring us to the end of life, but it is where we stepped along the way that defines us. Mike lived his life to the fullest. Stories told around the dinner table include stare downs with mountain lions, wolves and bears, panning for gold in the remote corners of the west, and recounts of how and where he had found so many perfect rocks. Those who are going to miss traveling with him the countless miles of dirt roads, with dust in their eyes and the faint scent of pipe tobacco in their nose, are his wife, Joyce, his sons John and Josh, John’s wife Laura, Josh’s partner Hannah, and his grandsons Everson and Corrick. True to his humble personality and dislike of crowds, Mike has requested only a simple family celebration of life at some point in the future. Mike spent his life learning and teaching about the natural world. To continue his legacy and because he knew it would help keep Joyce busy, in lieu of flowers please send memorial donations to the Beaverhead Trails Coalition at beaverheadtrails.com.

Michael Stephen Connors decided to take one final hike into the unknown on July 12, 2021. The cost of the many years of farming, building, and hiking in the sun finally was paid when melanoma came to stay. Mike was born in Sidney, Nebraska... View Obituary & Service Information

The family of Michael Stephen Connors created this Life Tributes page to make it easy to share your memories.

Michael Stephen Connors decided to take one final hike into the...

Send flowers to the Connors family.