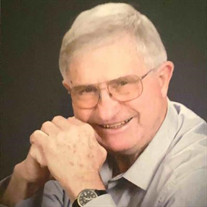 Merle D. Gilliland was born January 10, 1937, in Flippin, Arkansas as the fourth child to Simon and Marie Gilliland. The family relocated to Tehachapi, California in the 1940s, where they continued to grow and where they welcomed three more children. Merle returned to Arkansas for college, then continued his education at California Polytechnical State University San Luis Obispo, where he graduated with a degree in Architecture. In 1954, the Gilliland family moved to Bakersfield, California, where they made a warm and welcoming home next door to the Baker family. In meeting the young lady next door, it was clear that Merle had met his love and soulmate, Betty Baker. Merle and Betty were married on December 21, and began an incredible journey through life together. After completing college, the newlyweds moved back to Bakersfield, where they had their first two daughters, Lisa and Lora. Merle’s job with Dreyfus and Blackford moved the family to Sacramento, where they had their third and final child, Lynette. In 1969, the Gilliland family moved to the San Francisco Bay Area as Merle continued his work in architecture working on the design of the San Francisco International Airport. In 1971, the family settled on Tharp Drive in Moraga, California, where they built a loving home and formed lifelong friendships. Merle was the president of the Moraga Community Association and began the drive to incorporate Moraga in order to avoid a freeway going through town. In 1974, the City of the Town of Moraga was incorporated and Merle, along with four others, were on the original city council and formatted the city plans, laws, and established the police department. Merle was on the council for two terms and served as mayor in 1976. Merle and the original city council were presented a certification plaque by then Governor Ronald Reagan. On May 25, 1976, Merle met with, and later publicly presented a medallion to, President Ford. That medallion is now one of the curator’s favorite displays at President Ford’s Library in Grand Rapids, Michigan. Merle was predeceased by his mother and father Simon and Marie Gilliland, along with his daughter Lora and his brothers Jimmy, Wayne, Greg and sister Eileen. He is survived by his wife of 64 years, Betty, and his daughters Lisa Furrie (Ethan), Lynette Donahue (Mick), and son in law John Holmes. His love and pride in his grandchildren Tom Parks (Angela), Wayne Furrie (Deyin), Tyler Bettencourt, Aimee Furrie (John Grice), Deverie Engels (Graham), David Donahue (Caitlin Judge), and Katie Holmes (James Taylor) was unparalleled as was his adoration for his five great grandchildren. Merle undoubtedly had impressive accomplishments throughout his career, as he found opportunities to serve and care for every community in which he and his family came to reside. As an unwavering man of faith, he led with humility and compassion. For those who were blessed to know him, his unfailing love of God, his country, and his family stand out as some of his most defining and meaningful traits. Outside of his work, Merle thoroughly enjoyed life. He was frequently outdoors, making memories with friends and family members while hunting, fishing, rafting, and other recreational activities. As one always willing to help, he was an involved participant in many meaningful life moments for those he loved. Through both challenging and joyous moments, Merle created levity through laughter, bringing smiles to those around him. It is through those relationships and memories that Merle’s legacy will proudly and confidently live on. There will be a Celebration of Merle’s life at the First Presbyterian Church, 30 South Pacific Street, Dillon, Montana on Wednesday, April 6 at 11:00 AM. The family asks for any donations to go to the First Presbyterian Church in Dillon for the Kids to Camp Scholarship Program. Merle found joy in participating in this program.

Merle D. Gilliland was born January 10, 1937, in Flippin, Arkansas as the fourth child to Simon and Marie Gilliland. The family relocated to Tehachapi, California in the 1940s, where they continued to grow and where they welcomed three more... View Obituary & Service Information

The family of Merle Donald Gilliland created this Life Tributes page to make it easy to share your memories.

Send flowers to the Gilliland family.