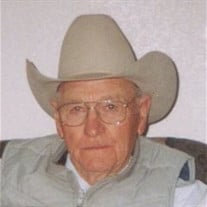 Marion Ray Cross (1931-2014) Marion Ray Cross passed away from a hard fought battle with liver cancer on Wednesday, November 26th. Marion was born in Leon, Kansas on July 17, 1931 to Garrett and Freddie Cross. He was one of nine kids, and grew up working on family farms. Marion was around farming and ranching most of his life. He graduated high school and started pursuing his life as a small ranch manager. He soon enlisted in the Unites States Army where he would stay for eight years and came home a Korean War veteran. After returning home he would go back to working on the ranch until meeting the love of his life one day at a small diner. Marion and Jackie would later get married and live happily ever after. After having one daughter in Kansas they took a leap of faith and moved halfway across the country to a small town in Montana. He started working on the Sheep creek operation of the Matador Ranch near Dell. They would have two more daughters and start the life of a big ranch family. Marion would eventually get promoted and moved to Dillon and became the manager of the Matador. He worked there for over thirty years before retiring. He and Jackie would buy a house outside of town where they would spend the rest of their lives. Even though he was officially retired he never officially stopped. He did odd jobs here and there to keep busy such as county water commissioner and part time ranch consulting. Marion was always fascinated with horses and riding. Whether it be breaking, training, or riding he was good at it all. He trained multiple horses to become top notch cutting horses and trained many more horses for every day riding. He is survived by his loving wife Jackie, his caring daughters Trula Kay Blize, Diane Gleason, and Darlene Cross, his grandchildren Jake Gould, Lexi Blize, Melanie Woodruff, Trevor Blize, Austin Cross, and great grandchildren Patrick Blize, and Ethan John Woodruff. To everyone who knew Marion he was a very respected and loved man who will be greatly missed. Please make donations to Beaverhead County 4H to support the kids. Services are as follows, viewing Tuesday, December 2nd from 5-8pm at the Brundage Funeral Home and the funeral will be Wednesday, December 3rd at 1pm at the Baptist Church on Thompson St in Dillon.   $(document).ready(function(){ });

Marion Ray Cross (1931-2014) Marion Ray Cross passed away from a hard fought battle with liver cancer on Wednesday, November 26th. Marion was born in Leon, Kansas on July 17, 1931 to Garrett and Freddie Cross. He was one of nine kids, and grew... View Obituary & Service Information

The family of Marion Ray Cross created this Life Tributes page to make it easy to share your memories.

Send flowers to the Cross family.