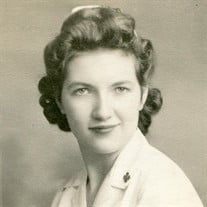 Lucille Balfour, 93 of Dillon, MT passed away at Parkview Acres Care and Rehabilitation on March 2, 2016. She was the first child born to Forrest and Myrtle Storey Campbell December 12, 1922 in Anaconda, Montana. She grew up in Anaconda and graduated from Anaconda High School in 1940. While in high school she played violin and viola in the orchestra and small string groups. Great Granddaughter Talana carries on with her violin. She entered Bozeman Deaconess Hospital Nursing program in the fall of 1941. She was engaged to John Paddock and they married when he was home on leave, October 17, 1942. She finished her nurses training and worked a year as an R.N. at Galen until he was discharged from the Army Air Corp in 1945. They lived in Anaconda for several years and were the parents of three children, Jim, Bob and Carole. They lived near Pablo in the Flathead Valley and had a dairy for a short time. On returning to Anaconda both she and John worked at the Tuberculosis Sanitarium at Galen. They moved to Dillon in 1961 where they owned a service station. Lucille went back to school in Bozeman and earned her B.S.N. degree at Montana State University. After John died in 1965, she was the Dean of Women at Western Montana College for two years before returning to work as a nurse at Fort Harrison in Helena. She again went back to college and obtained her Master’s Degree in Nursing in 1970. In the ensuing years, she also worked for the Indian Health Service; was the Executive Director of the Montana Nurses Association; taught in the Nursing program at Idaho State University and returned to Montana to work at the Montana State Health Department. In 1982 she went to Sitka, Alaska to work at Sheldon Jackson College. It was there she met and married Clinton Balfour in 1984. After he finished his volunteer stint at the college they settled in Florence, Oregon. They were both active in volunteering. They were on the board for the Dial-a-Ride agency and she drove the Dial-a-Ride bus for eight years; was on the advisory boards for Hospice and Home Health; was on the board for an agency working with the developmentally disabled; was on a committee working to provide educational opportunities for senior citizens; took continuing education courses at the local junior college; was an avid genealogist who traced and documented both sides of her and both husbands families. Clint died in 1997. She loved to read- history and mystery- and had a large collection of books. She participated in at least two archeology digs and was an avid photographer. She has been an active volunteer at the Montana Historical Society since her return to Helena in 2002. As time permitted she quilted and knitted. She traveled extensively- to Mexico, Europe, Scotland, England, Ireland, Hawaii, Alaska and many of the states in this country. She is survived by a sister, Virginia Paddock, Boulder CO; her sons James (Jo Ann) Paddock; Robert (Mary) Paddock, Dillon, MT, and Carole Herron (Wayne Momsen), Helena, MT; step- son, Ron Balfour, West Virginia, and step- daughter, Faye (Ken) Morley, California. Grandchildren, Betty (Mike) Mooney, Dillon; Barbara (Mike) McAlonan, North Carolina; Brenda Nelson, Grants Pass, OR; John C. (Chandra) Paddock, Dillon. Great-grandchildren, Andy and Cindy Atchley; Talana and Teernan Nelson; Erin, John and Sarah McAlonan and Mathew Paddock. Step- grandchildren Dawn Morley, Sacramento; Tom Morley, California; Dr. Kara Morley Smolek (Dan), Michigan; Yvonne Balfour-Bell (Bill), Virginia; Dana (Alan) Briggs, CT; Todd (Lisa) Balfour, Vermont; seven step- great- grandchildren and several nieces and nephews. She was preceded in death by her parents and sister, Avril Hoblitt. Memorial contributions may be made to the Montana Historical Society, Helena or a charity of the donors choice. Burial services will be at Sunset Memorial Gardens in Anaconda at a later date.

Lucille Balfour, 93 of Dillon, MT passed away at Parkview Acres Care and Rehabilitation on March 2, 2016. She was the first child born to Forrest and Myrtle Storey Campbell December 12, 1922 in Anaconda, Montana. She grew up in Anaconda and... View Obituary & Service Information

The family of Lucille Mae Balfour created this Life Tributes page to make it easy to share your memories.

Lucille Balfour, 93 of Dillon, MT passed away at Parkview Acres...

Send flowers to the Balfour family.