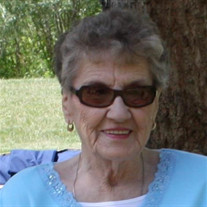 Lorrayne Rebich Obituary Agnes Lorrayne Pierce was born on March 24, 1925 and passed away peacefully on September 2, 2016 in Dillon, MT. Lorrayne was the daughter of Thomas R. and Agnes Kau Pierce of the Horse Prairie Valley and she lived all her life in Beaverhead County. She grew up on the family ranch in Horse Prairie and in Dillon with her two brothers Thomas M. and Richard C. Pierce and her sister Gladys Adele (Adele Rouse). She was only three years old when her father died of appendicitis, after which her mother raised the family and managed the ranch. Lorrayne first attended school in Grant, MT then high school at Beaverhead County High in Dillon, where she was the second young woman to be elected Student Body President. When she started high school the current building was still under construction, so her first few months of high school were taught in the building that became Western Montana College (then called Montana State Normal College). After graduation in 1943 she spent a semester at Montana State University in Bozeman before returning to her home in Dillon. In 1946, Lorrayne married Raymond Rebich after his return from serving in the Navy. They lived in Dillon and then on the John Rebich ranch until moving onto part of the old Pierce Ranch south of Armstead in 1949, where they ranched until the summer of 1957. That year, the government purchased their land for construction of the Clark Canyon Dam. They moved to Dillon where Ray started to drive truck, then started his own trucking company, Ray Rebich Trucking, which they operated until he passed away in 1993. Lorrayne and Ray had three children. Adele Lynn (Adele Taylor) was born in October 1949, Raymond John in June 1951, and Wayne Stephan in June 1963. In June 1968 their daughter Adele married Phil Taylor, and they still reside in Dillon where they own and manage the Sleepy Hollow Golf Course. In October 1968 Ray Jr. died at the age of 17 in a hunting accident south of Dillon. Their son Wayne married Wendy Eck in 1981 and they reside in Everett, WA. Lorrayne loved Dillon and was proud to call it her home. She was preceded in death by her parents and her siblings Thomas and Richard, along with her husband Ray and her son Ray Jr. She is survived by her sister Adele Rouse, her daughter and son-in-law Adele and Phil Taylor, and son and daughter-in-law Wayne and Wendy Rebich, along with grandchildren Trista Snyder (47), Tory Taylor (44), Trent Taylor (42), Tennille Allison (37), Thatcher Taylor (30) and Kylie Rebich (24). She is also survived by 12 great grandchildren and 4 great, great grandchildren, as well as numerous nieces and nephews. A visitation is scheduled for Thursday, September 8th from 4 – 8 PM and from 9 to 10:30 AM on Friday at Brundage Funeral Home, with funeral services starting at 11 AM at Brundage Chapel in Dillon. Interment will be at Mountain View Cemetery with luncheon to follow at the Catholic Center. The family would like to give a special thank you to everyone at Legacy Assisted Living, Dr. Sandra McIntyre, and to the staff at Barrett Hospital and Healthcare, with special thanks to Marie Holt for her care and support of Lorrayne and her family during the past weeks. Donations can be made to Beaverhead County Search and Rescue.

Lorrayne Rebich Obituary Agnes Lorrayne Pierce was born on March 24, 1925 and passed away peacefully on September 2, 2016 in Dillon, MT. Lorrayne was the daughter of Thomas R. and Agnes Kau Pierce of the Horse Prairie Valley and she lived... View Obituary & Service Information

The family of Lorrayne Rebich created this Life Tributes page to make it easy to share your memories.

Send flowers to the Rebich family.