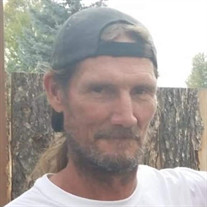 Lonnie Jay DuBois August 26, 1966 ~ January 3, 2021 After a year long battle with a very rare form of Lymphoma Lonnie lost the battle. Lonnie was born in Dillon on Aug. 26, 1966 to Dave and Deeann DuBois. He was the 2nd out of 7 children. He Grew up in Dillon and Belcourt, N.D. After dropping out of school he went to Job Corp in Clearfield, Ut where he got his High School Diploma. After that he got his apprenticeship in welding in the trade school program at the Weber State College in Ogden, Ut. While there he met and married Mindy Jo Anderson & gained a son, John and together they had another son, Lyndon James "LJ". They later divorced and Lonnie moved to Avondale, Az where he met Debra Sanders and he gained 3 more children, Bernida, Jerry & Bobby. From all of his children he gained 20 grandchildren and 3 great grandchildren. He was most proud of being their Papa! They were his world and was completely devastated when he lost 2 of them, granddaughter NyJada 20yrs and great granddaughter Iona 9yrs two summers ago in a tragic accident. He owned and operated his own tree trimming company in Apache Junction, Az for 25 yrs until a little over 2 yrs ago when they moved to Medford, Or. Where he worked for a CBD company trimming and in the lab. He worked there until the cancer made it impossible to work any longer which drove Lonnie nuts. He would still try to go in on his good days just to realize he couldn't do it. He came back to Dillon on 12/27/2020 and landed in the hospital early that morning and by noon they were admitting him. They let him come home 4 days later where he passed away peacefully surrounded by his family. He is survived by his 2 sisters, Candis & Kari Jo, 3 brothers, Dave, Jonathon & Seth, daughter Bernida, 4 sons, John, LJ, Jerry & Bobby, the Love of his life Debi, his favorite Uncle Rick (Paula) DuBois, several Aunts & Uncles, Numerous Cousins, Nieces & Nephews, and his world, the Grandbabies & Great Grandbabies. He is preceeded by his parents Deeann & Dave Jr., sister Jolene, grandparents; Addie, Louie, Cis, Dave Sr. & Grandpa Al, granddaughter NyJada & great granddaughter Iona, Aunts Vaneasa Buell & Isabell "Diz" McAlpin, Uncles Andy Ericksen & Larry Erichsen, cousins Michelle, Echo & Dawn. If you send flowers and or donations, please send them to Brundage Funeral Home. Thank you.

Lonnie Jay DuBois August 26, 1966 ~ January 3, 2021 After a year long battle with a very rare form of Lymphoma Lonnie lost the battle. Lonnie was born in Dillon on Aug. 26, 1966 to Dave and Deeann DuBois. He was the... View Obituary & Service Information

The family of Lonnie Jay DuBois created this Life Tributes page to make it easy to share your memories.

Send flowers to the DuBois family.