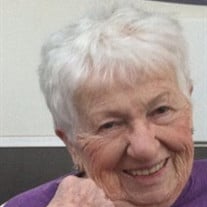 Lois Marie Lynch passed away on December 20, 2013 in Barrett Memorial Hospital.  Lois died as she lived, on her terms and surrounded by her loving family.  Lois was born in Butte, Montana on September 9, 1925 and spent her youth there.  Lois met her future husband, Ray Lynch, in Butte when they were in the 8th grade.  Ray and Lois were married at St. Rose Catholic Church in Dillon, Montana on June 1, 1946, in a double ceremony with her brother Lloyd Dougherty and Annabelle George. Lois and Ray built their life and home in Dillon, Montana.  Together they operated the Beaverhead Laundry and Dry Cleaners with Lloyd and Annabelle until the late 1970s.  Ray and Lois were true public servants.  While Ray was involved in various elected positions in Dillon, Lois was active in serving her church, her community, and raising a loving family.   When Ray died in 1996, Lois filled her days serving others through volunteering.  She was very active with the Beaverhead County Museum, Dillon Food Pantry, and St. Rose Parish.  Lois was instrumental in growing the Barrett Hospital Auxiliaryâ€™s Gift Shop into the success that it is today.  The Lynchâ€™s offered their love and hospitality to everyone.  Labor Day get-togethers at their home were highly anticipated every year by friends and family from near and far. Lois was preceded in death by her husband, Raymond M. Lynch; parents, J.T. and Josephine Dougherty; brother and sister-in-law, Lloyd and Annabelle Dougherty; sister and brother-in-law Virginia and Evan Martinsen; son-in-law, Jack Eason; daughter-in-law, Bobbie Lynch; and grandson T.J. Lynch. Surviving are daughter, RaeLene Eason, sons and daughters-in-law, Pat and Teresa Lynch and Jim and Torri Lynch; grandchildren Michele (Tim) Shea, Raymond (Christy) Eason, Jeff (Diane) Kroll, Jaime (Ben) Stephens; and Ceth Haggard.  Also surviving are Loisâ€™ great-grandchildren,  David and Katie Dutton, Gracie Eason, Mallory, Willy, and Timmy Shea,  Lily, Ella, and Eden Stephens, and Caleb  and Carter Kroll.  Lois is also survived by a large extended family of numerous nieces, nephews, and cousins.   Visitation will be Thursday, December 26th from 4 to 7 PM at Brundage Funeral Home.  A Funeral Mass will be celebrated Friday, December 27th, 12:10 pm at St. Rose Church in Dillon.  A potluck reception will follow services at St. Rose Family Center.  Memorials are suggested to the Dillon Food Pantry or donorâ€™s choice.   $(document).ready(function(){ });

Lois Marie Lynch passed away on December 20, 2013 in Barrett Memorial Hospital.  Lois died as she lived, on her terms and surrounded by her loving family.  Lois was born in Butte, Montana on September 9, 1925 and spent her youth there.  Lois... View Obituary & Service Information

The family of Lois Marie (Dougherty) Lynch created this Life Tributes page to make it easy to share your memories.