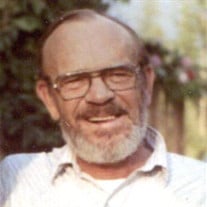 Dillon, Montana- Leonard A. Benjamin (80) died of natural causes on September 11th, 2018; at his home outside Dillon. His ceremony will be a private memorial at his beloved family cabin in the mountains above Lima, Montana. He is survived by Joye Benjamin, Dillon, Montana; children; daughter, Bonny L. (Benjamin) Peterson, Eureka, Montana; son, Vince L. Benjamin, Seward, Alaska; his sister, Victoria; and grandchildren, Virginia Cope, Clinton Kolschefsky and Cassandra (Benjamin) Kougl, Eureka, Montana; Wade Benjamin, Michael Benjamin, Seward, Alaska; and four great grandchildren. Leonard was born in Shelby, Montana to Dr. Leonard M. Benjamin and Anthony (Striedenger) Benjamin on April 8th, 1938. His early years were dictated by his father’s medical school training. This took him through Missoula, Minneapolis, Denver, Butte and finally Deer Lodge in in 1946. Leonard was “Lenny” throughout his school years in Deer Lodge. Lenny spent a lot of time with his beloved grandfather, Harry Benjamin, in Shelby and on the farm at Oilmont, north of Shelby. After High School Graduation in 1956 he attended the University of Montana for a brief period making the “dean’s list” as he would say. The “dean’s List” where you drink beer and don’t go to school until they invite you to leave college that is. Leonard was in the Army National Guard at the time and upon taking the deans advice to leave the U of M, joined the Army. He put in 2 years in the Army, much of it in Fort Knox, Kentucky. On his way to Fort Knox, at 19 years old, in an old Buick he drove through Chicago. Upon stopping at a stop sign a man with a knife jumped in the passenger’s side of the car demanding he get out so he could steal the car. At the same time, Lenny and the thief looked down at the seat at Dad’s 38 revolver. The thief’s eyes got really big and out he went, exiting the same door he entered. Lenny never said a word, but did lean over and lock the passenger’s side door. Upon returning to Montana, Lenny spent the early 1960’s mining, ranching, trucking and driving school bus from the Jackson ranch, where he worked in Jackson, to Dillon, where he attended college. This is where he met the one and only love of his life, Joye Van Gilder. Leonard and Joye were married in 1961 and soon had 2 children. Lenny was now “Leonard” and his first teaching job was in Browning, after 4 “interesting” years in Browning he enrolled in graduate school back at the U of M. This time, he made the correct “dean’s list” while completing his Master’s degree in School Administration. Leonard took the superintendent of school’s position in Geyser, in the summer of 1971. Leonard got out of the school business and went back to his true love of ranching in Stanford in 1975. He took pride in teaching his children his passion of hunting and fishing in the Judith Basin of Montana. All the while, instilling the work ethic that Montana ranch kids seem to learn. After his children finished high school in Stanford, Leonard and Joye moved back to the favored Dillon area in 1982 where he ranched and drove semi-truck. Living out a lifetime bucket list, he followed his son to Alaska in 1993. While in Alaska, he lived in Nome, Valdez, Dillingham and Seward. Leonard enjoyed the outdoors of Alaska as much as Montana. Hunting and fishing with his two children was a priority in Alaska. Finally retiring from Southwest School District in Dillingham, Alaska he moved to Seward, Alaska in the year 2000 to help his son build a business. Leonard’s dry humor and gentle nature made him a man of many friends in Seward. Leonard had his “spot” at his son’s restaurant in Seward. The locals knew his spot and looked for him when they entered. He loved to talk at the restaurant. It was fun to watch. Leonard loved kids, dogs, and tolerated the rest of us. He would walk the restaurant floor nearly every evening with free candy suckers for the kids. The last 10 years of his life were spent outside of Dillon, Montana in a small house that he built. Much of his time was dedicated to gopher control, the gophers won that battle. Leonard also gardened, and spent time at the family cabin outside of Lima. Joye was with Leonard till the end, talking with him and helping him with his needs. He was very grateful of Joye’s kindness. Leonard passed away with dignity in his home outside of Dillon, just as he wanted to. Leonard was preceded in death by his parents, and his brothers Harry Benjamin and Darrell Benjamin of Deer Lodge. Memorials are suggested in the form of hugs or a phone call to your family and friends as that is what Leonard would have wanted.

Dillon, Montana- Leonard A. Benjamin (80) died of natural causes on September 11th, 2018; at his home outside Dillon. His ceremony will be a private memorial at his beloved family cabin in the mountains above Lima, Montana. He is survived... View Obituary & Service Information

The family of Leonard A. Benjamin created this Life Tributes page to make it easy to share your memories.

Send flowers to the Benjamin family.