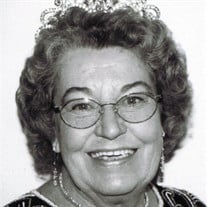 Lei Lani Johnson (Brown) 79 passed away peacefully, April 13, 2017 at Barrett Hospital in Dillon, MT. Lani was born July 29, 1937 in Banning, CA to Walter H. Brown and Helen Daisy Brown (Rawlins). She moved to New York State, where she learned to swim in a pond at 4 years old. She attended grade school in Othello, WA and La Habra, CA. She was a crack shot at 11 years old; hunting pheasant and rabbits on Beach Blvd. Her mother died that year. Lani’s father was an engineer for the City of L.A. Water Project and moved to Rovana, CA for the Owen River Gorge Job. Her father married Sophia Brown. Lani commuted to high school in Bishop, CA. She had an older sister Clara McMillan and two younger brothers Walter Brown II and Patrick Brown. Lani met Glendon D. Johnson in the year of the Big Snow 1951. Then they eloped on Nov. 27, 1952 in Tonaph, NV. She was 15, Lani and Glen lived in Tom’s Place, CA where Glen worked for City of L.A. Water Project, Owen River Gorge, then transferred to Division Cr. in 1955. In 1957 Lani and Glen moved to Deep Springs, CA to work for CA Division of Highways, then to Lee Vining, CA in 1959, then to Bridgeport, CA in 1960 where her 3 children; Casey, Eric and Loraine attended elementary school. Lani worked for the census, and secretary for Mono Co. D.A. Lani was den mother for cub schouts; 4-H; P.T.A; March of Dimes, Beta Sigma Phi, and Eastern Star. She enjoyed Barrel Racing, Pole Bending, and Parades on her horse Brownie. Lani and her family moved to Pacifica, CA in 1967, Fawnskin, CA Hwy Maintenance Sta. in 1968, then Crestview, CA Hwy. Maintenance Sta. in 1970, then Sonora Jct., CA Hwy. Maintenance Station in 1974. In 1980 Lani and Glen built a house in Bridgeport, CA. Lani was on the grand jury and secretary to the superintendant of Eastern Sierra Unified School District. Lani and Glen traveled to Hawaii, Alaska, India and the Siberian Express in Russia. In 1991 Lani and Glen moved to Dillon to retire. Lani attended ceremonies of the Supreme Temple Daughters of the Nile, and was Queen of the Tirzah Temple in Butte. Lani and Glen built a house out on the Blacktail in 1996. Lani moved back in town in 2008 after Glen’s passing. She spent time playing bridge and visiting friends. Lani was preceded in death by her husband; Glendon D. Johnson. Lani is survived by her son’s Casey Johnson of Dillon, Eric Johnson of Sparks, NV, and daughter Loraine Duncan, of Walker, CA, her grandchildren Megan Johnson of Reno, NV, Cory Johnson of Reno, NV and Paul Hondo Duncan of Walker, CA, her sister Clara McMillan, of Spokane, WA, her brothers; Walter Brown II of Vista, CA, Patrick Brown of Concord, CA and numerous nieces and nephews. Special Thanks to Barrett Hospital, Dr. Karen Weed, and the Hospice Girls. Memorial contributions may be made to Barrett Home Health and Hospice. A visitation is scheduled for Friday April 21st from 6 – 9 PM with Funeral Services on Saturday, April 22nd at 11 AM at Brundage Funeral Home.

The family of Lei Lani Johnson created this Life Tributes page to make it easy to share your memories.