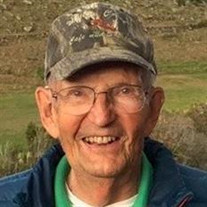 Lawrence (Larry) B. Link Larry passed away surrounded by loved ones at Barrett Hospital in Dillon on Sunday January 5, 2020. He was born in Los Angeles, California on April 1, 1933 and moved back to Montana with his parents when he was two. Growing up with Yellowstone Park in his backyard, Larry learned to appreciate the natural beauty of Montana and loved hunting, hiking, camping, and fishing. He attended elementary school in Gardiner and graduated from Park County High School in Livingston in 1951 as senior class president. He served in the U.S. Army as a Military Policeman in post-war Berlin, Germany. He met his wife Darleen in high school, and they were married shortly after his military service. The young couple moved to Helena when he was given a job examining unemployment applications immediately after applying himself. After that he was a bookkeeper for a construction firm before becoming the Director of Financial Aid at Western Montana College. He was always learning and attended Helena Business College, LaSalle Extension University, Idaho State University, and Western Montana College while he was working full time. His hard work was rewarded when he received his CPA license in 1979. After retiring from the college in 1985 he practiced as a CPA in Dillon until he was 80. He was well-known and loved in his community and took pride in growing the earliest daffodils & tomatoes and baking the best raspberry rhubarb pie in Dillon. He is a life member of the American Legion, Veterans of Foreign Wars, and the Dillon Elks. He is predeceased by his father Edward Lawrence Link, mother Beryl (Bishop) Link, and wife of 61 years Darleen (Eastep) Link. He is survived by their daughter Dr. Laureen Link, son in law Dr. Jeff Cooper, grandchildren Brian Cooper, Tara Cooper, and Kelly Cooper of Redding, California. He is also survived by their son Garry Link, daughter-in-law Linda Link, grandchildren Nick Bosworth and Wyatt Link of Pacific City, Oregon. He is also predeceased by his brother-in-law Donald Eastep and survived by his sister-in-law Mimi Eastep and their families. Brundage Funeral Home is overseeing cremation and services. His memorial service will be held at the Saint James Episcopal Church on January 18, 2020 at 11:00am followed by a luncheon reception at the Guild Hall. Burial with military honors will be at the Mountain View Cemetery in Livingston on January 19, 2020 at 1:00pm.

Lawrence (Larry) B. Link Larry passed away surrounded by loved ones at Barrett Hospital in Dillon on Sunday January 5, 2020. He was born in Los Angeles, California on April 1, 1933 and moved back to Montana with his parents when he was two.... View Obituary & Service Information

The family of Lawrence Bishop Link created this Life Tributes page to make it easy to share your memories.

Lawrence (Larry) B. Link
Larry passed away surrounded by loved...

Send flowers to the Link family.