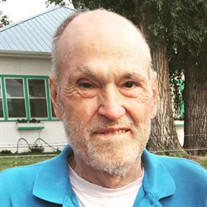 Kim Erwin Baker, 60, of Dillon, died July 19, surrounded by many people who loved him. He fought a valiant fight against cancer for almost 10 years. Kim was born in Miles City on August 12, 1955 to Joyce Weiss Baker and Ray Baker. He lived in Missoula, Ingomar, and Coltstrip before he moved to Dillon in 1967. He attended the Dillon schools, graduating in 1974 as the class president. He attended Montana Tech, while wrestling and playing football collegiately. After college, Kim began his construction career in 1979. Some of his jobs include Stockman Bank, Beaverhead Brewing Company, Orme Family Dentistry, Precision Eye Care, Chamber of Commerce Building, and Montana High Country Guest Lodge in Polaris, along with many beautiful homes in Dillon. Kim married Tammy Vinger on July 24, 1982. This Sunday would have been their 34th wedding anniversary. They were blessed with three children: Elizabeth, Kale and Alyse. Kim was a proud member of the Dillon Jaycees where he was instrumental in many improvement projects. He brought George Strait to Dillon for the very first Labor Day Concert. Many who knew Kim knew of his can-do attitude and his will to “get the job done.” Even through his years of suffering he met people with a smile and an optimistic outlook, always putting others first. The last selfless act Kim did was to donate his corneas so that someone else could receive the gift of sight. We all were better people from knowing this wonderful man. Kim will be remembered for his amazing work ethic, courage in the face of adversity, and his attitude which determined his outlook on life. Also his tall tales, which you had to cut in half to reach the reality! Kim is survived by his wife Tammy, his children Elizabeth (Seth) Thomas, Kale Baker, Alyse Baker, his two grandchildren, Adeline and Rylan Thomas, and his parents Ray Baker of Miles City and Joyce Baker of Dillon, along with his sisters Stacia Baker, Dawn Jensen, Daneen Weaver, and numerous nieces and nephews. In lieu of flowers we ask that you make a donation to Barrett Hospital Foundation at 600 Hwy 91 South, Dillon, MT 59725 or Relay for Life of Dillon at 3550 Mullan Rd, Ste. 105, Missoula, MT 59808.

Kim Erwin Baker, 60, of Dillon, died July 19, surrounded by many people who loved him. He fought a valiant fight against cancer for almost 10 years. Kim was born in Miles City on August 12, 1955 to Joyce Weiss Baker and Ray Baker. He lived... View Obituary & Service Information

The family of Kim Erwin Baker created this Life Tributes page to make it easy to share your memories.

Send flowers to the Baker family.