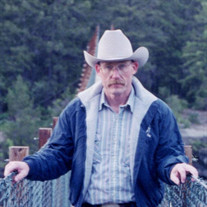 Kevin H Allen passed away January 9 th 2021 at his home in Whitehall, MT from natural causes. Kevin was born in Rigby, ID June 26 th 1955 to Louis Calkins Allen and Eldena Mabel (Hansen) Allen, the youngest of 5 boys. Louis worked for the railroad and the family moved along with it. When asked, Kevin would say he grew up in Glen, MT. He fondly told stories of working on ranches in the area and raising hell with his brothers. Southwest Montana was always his home in his heart. Kevin graduated from Beaverhead County High School in Dillon, MT in 1974. He joined the Army in November of that year and served until 1980. It was then that he married his first wife Jodie Teague, of Clinton, MT. They welcomed a baby girl in April of 1982. He served again, in the Air Force, as a Security Technician from 1982 to 1986. As a civilian he worked as a guard at Montana State Prison for a brief period before becoming a truck driver for many years. He and Jodie divorced in 1995 but maintained a friendship for the remainder of his life. Kevin was a patriot. He loved God and his country and was always outspoken about what he believed. In 2003 he joined the Army National Guard and deployed with the 143d Military Police Detachment to Iraq. He was involved in an attack in 2004 that left him without sight in one eye. He received a purple heart. This was one of many awards and commendations he earned during his military career. He retired from the National Guard in 2005. He was a great horseman. He would rather be out riding than doing just about anything else. He loved the outdoors, fishing and farming. He had a terrific sense of humor and a (very) firm handshake. He was always quick to lend a hand, to open his home to family or provide a homecooked meal to a single soldier. Kevin is preceded in death by his parents, Louis and Eldena Allen, brothers Gary Allen, Sonny “Kay” Allen and Rex Allen. He is survived by his brother Chip Allen (Barb) of Hobbs, NM, daughter Torrie (Allen) Cooney of Clinton, MT, son-in-law Jesse Cooney and Grandson Chase Cooney. He will be laid to rest in Melrose, MT, where he always wished to return. A graveside service will be held at the Melrose Cemetery Friday January 15th at 11:00 am.

The family of Kevin H. Allen created this Life Tributes page to make it easy to share your memories.

Send flowers to the Allen family.