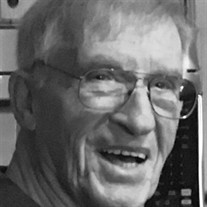 Joseph William Champine passed away peacefully surrounded by his family on Saturday January 4, 2020. There is a celebration of life scheduled for January 11th, 2020 at 11 AM at the Methodist Church in Dillon. Memorials may be made to the American Cancer Society or Beaverhead Animal Shelter. Joe was born December 16, 1930 in Campbell Nebraska. HIs family moved to Montana, where Joe went to the first grade of school in Dillon. They moved to Darby, where Joe graduated from high school in 1948, and two brothers and two sisters were born during the previous fourteen years. Joe worked at a sawmill for the next year and, at the outbreak of the Korean War, joined the Navy Reserve and went on active duty as a Seabee surveyor assigned to ComServLant at Norfolk, VA. After two years active duty, Joe returned to Billing, MT, where he met and married Leona Schneider in 1954. There were four daughters and a son born of that union over the next 14 years. In 1953, he began a career in farm/ construction equipment manufacturing & wholesale distribution which would take him from Montana to the Canadian Provinces of Alberta, Saskatchewan, Manitoba, and Ontario; and then to Kansas over the next 24 years. There he joined Midwest Machine Shop. In 1980 he moved to Dillon to work with his brother, Jack, at C & C Farm & Ranch Supply in the aftermath of a fatal crash of an ANG jet striking a grain elevator in downtown Dillon. Joe became active in C & C in 1983 and remained active until C & C was purchased by Lakeland Feed in July 2010. Leona and Joe divorced in 1987. He later married Sharon Schleicher and enjoyed his extended family. They built a library of wonderful memories camping across the Northwest, down the Columbia River, multiple trips to the Oregon Coast, Arizona, Colorado, Idaho and New Mexico. Tours including the Bahamas, Ozarks, New England, Alaska and the Caribbean. They looked forward to October and the annual Sun Valley Jazz Festival, with its excellent musicians and shows, as well as the beautiful fall scenery. He also enjoyed a ‘Capella chorus and quartet music, especially Barbershop Harmony, where he directed choruses and sang in quartets over 25 years. Joe was a humble, kind and gentle man with a cheerful disposition, always caring and considerate of others, who never criticized or complained. He was wise and witty, finding humorously colorful ways to describe an event or situation. How Joe loved the outdoors! He enjoyed early mornings and looked forward to the chance of seeing the northern light displays before dawn in the spring and being escorted down the country roads by bluebirds and robins at sunrise. He enjoyed fishing, hunting and camping in remote areas. He was a keen observer of nature, and never failed to find beauty in it. He relished being surrounded by woods, wildlife and his beloved mountains. No doubt he and this earth were equally enriched by each other’s company. An endlessly patient father, loving husband, and a treasured friend to many, Joe believed in the goodness of people and always assumed the best about them. He also gave generously to his community, volunteering his time and many talents to friends, his church and those less fortunate. He was a member of Grace United Methodist Church and held various positions there. Joe lived life to the fullest and made this world a better place. He will be missed by all blessed to know him and his memory will be forever cherished. We wish to thank many of the Barrett medical staff; especially Dr. Burke Hansen and Suzie Burgess, who not only took such good care of him as a patient, but also treated him as a dear friend. Survivors Joe was preceded in death by his parents, brothers Jack (Myrna), James (Gloria) Champine, Allen Johnson, and sister Carol Johnson. He is survived by his wife of 31 years, Sharon; daughters Merrie Dreyer (Ralph), Diane McLennaghan (Don), Jeri Champine (Bill Kramer), Patricia Champine, son Michael Champine (Corrin); as well as step children Dawn Atchley (Stan) and Charles Miller (Rachel); siblings, Janice Cyr, (John, deceased), Melody Ireland (Henry), Barbara Johnson, Ann Marlow, and numerous grandchildren, great grandchildren, nieces and nephews.

Joseph William Champine passed away peacefully surrounded by his family on Saturday January 4, 2020. There is a celebration of life scheduled for January 11th, 2020 at 11 AM at the Methodist Church in Dillon. Memorials may be made to the American... View Obituary & Service Information

The family of Joseph William Champine created this Life Tributes page to make it easy to share your memories.

Send flowers to the Champine family.