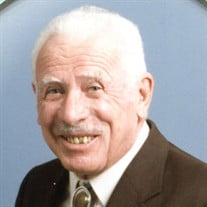 Joe Carroll passed on December 21, 2019. He was born on October 2, 1922 to William and Louise Carroll. His mother passed shortly after he was born. His Aunt Mayme Madden Purdy along with her daughter Mary Louise took care of him. On June 9, 1926 Bill and Mayme married. Joe attended school in Dillon and spent summers on the Carroll ranch in the Big Hole. He graduated from BCHS in 1940. He was attending Montana State College when the bombing of Pearl Harbor occurred. He enlisted in the Army Air Corps and trained as a flight engineer and top turret gunner, graduating near the top of his class, which automatically assigned him to the 379th Bomb Group which was based near Kimbolton, England. He completed 36 missions and received 7 air medals. In 1947, he married Genevieve “Judy” Browning. They had seven children who survive him. They divorced in 1978. Later he married Edna Collins. They divorced. While working on a ranch in Idaho, he met Helen McInelly. They were a couple in Pocatello until her passing in 2013. While living in Pocatello, he wrote his war memoir, “A While in the Wild Blue”, in collaboration with his son Bill. While living in Idaho, he became active in Alcoholics Anonymous. After her passing, he returned to Dillon. In 2017, he was the recipient of the French Legion of Honor Medal. He was also honorer with a bronze plaque at the Southwest Montana Veterans Memorial Park. He loved to read, write letters, play card games, carve wood, and tell stories. He is survived by seven children: William Peter (Dana), Marie Theresa (George Holt), Patrick John (Carol), Michael Thomas, Shawn, Maureen (Lee Halpin) and Charles; grandchildren: Keely, Caitlin (Ian Lyon), Colleen (Braden Leonard), Erin, Lindsay, Grady Holt (Stacey Terrill) and step grandson Austin Diaz. One great-grandson, Marshal Holt and a step great-granddaughter Elizabeth Terrill. He is also survived by his sister Ann (Gile Mitchell), a niece and four nephews. A grandson, John Joseph Winterrowd preceded him in death. Most of all, he will be remembered for his sparkling blue eyes, sense of humor and quick wit.

Joe Carroll passed on December 21, 2019. He was born on October 2, 1922 to William and Louise Carroll. His mother passed shortly after he was born. His Aunt Mayme Madden Purdy along with her daughter Mary Louise took care of him. On June 9,... View Obituary & Service Information

The family of Joseph Francis Carroll created this Life Tributes page to make it easy to share your memories.

Send flowers to the Carroll family.