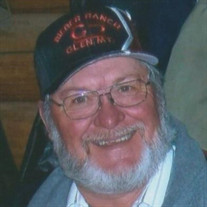 John William “Johnny Bill” Rieber, 72, of Glen, Montana, passed away May 5, 2022 at Barrett Hospital and Healthcare in Dillon, surrounded by his family. He was born April 10, 1950 in Butte, to John C. and Rosemary G. (Bourn) Rieber, just hours after his grandmother passed away. John attended Reichle School and Beaverhead County High School, graduating in 1968. He enlisted in the Army National Guard in October 1968 and was stationed for a time in Fort Knox, Kentucky. John was honorably discharged in 1976. He later went to Western Montana College in Dillon. In 1976 he was set up on a blind date, who stood him up. He later agreed to another try and met Michele “Mick” Loshesky, whom he married on October 9, 1976. They settled on the ranch in Glen and had three children: Chris, born in 1978; Cory, born in 1979 and Jan, born at home in 1982. John served on the Reichle School Board as trustee and as chairman, during which time his kids attended; during the same time the school burned down and was rebuilt. He was president of the Southwest Montana Stockmen’s Association and a member of Southwest Montana Marketing Association, through which he shipped cattle to Columbus, Nebraska since 1982. He traveled there each fall to oversee the feeding and care of his livestock and to watch the sale. It was his annual “vacation” and looked forward to it each year. He loved ranching but also enjoyed hunting and fishing. He often recalled that the coldest he’d ever been was in Kentucky and always said that of any place he’d been, Glen, Montana and his ranch was his favorite. He was a family man who loved and supported his wife, children, and grandchildren. He enjoyed the music of Marty Robbins and the Statler Brothers. He was a man who wore many hats but was most proud to wear his Rieber Ranch hat. He was preceded in death by his parents John C. and Rosemary Rieber; father-in-law and mother-in-law Mike and Jean Loshesky and brothers-in-law John Maki and Frank Stanchfield. He is survived by his wife, Mick; sons Chris (Holly) Rieber and Cory (Amy) Rieber; daughter Jan (Ray Fliehman); grandchildren Parker, Reagan and Kristian Rieber; Matthew Fliehman and honorary grandson Lane Wuelfing-Poirier; sisters Rosemary (Richard) Wenger, Regina Maki, and Edith Stanchfield; numerous nieces, nephews and many treasured friends. A visitation will be held Friday, May 13, 2022 at 1 pm at Brundage Funeral Home in Dillon. The funeral service will begin at 2 pm, with burial to follow at Mountain View Cemetery. A reception will be held afterward at Glen Bar. The family wishes to thank the doctors, nurses and staff of Barrett Hospital and Healthcare for their care and compassion during John’s final days. John requested that any memorials be made to Friends of the Fair, c/o Beaverhead County Extension, 2 S. Pacific, Suite 211, Dillon, MT, 59725 to support building a new 4-H building at the fairgrounds, or to Reichle School Booster Club, 1605 Rock Creek Road, Glen, MT 59732 or to a charity of donor’s choice.

The family of John William Rieber created this Life Tributes page to make it easy to share your memories.

Send flowers to the Rieber family.