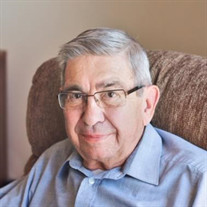 John Richard “Dick” Roberts John Richard “Dick” Roberts passed away Tuesday May 7, 2019 at the age of 80 years old. He had his family by his side. Dick was the only child of Jack and Florence Roberts. He was born January 22, 1939 in Great Falls, MT. His family moved to Dillon in 1940, where they established Roberts Foods grocery store in 1941 and Roberts Packing in 1944. Dick graduated from Beaverhead County High School in 1957 and attended Montana State University. He made a transatlantic cruise during his high school years with his parents to visit their family in their homeland of Wales. Dick married Sylvia Ibey Roberts in 1958. Together they had four children; Danny, Jackie, David and Susan. They raised their family in Dillon, where Dick continued operation of the meat packing plant, and as a cattle buyer until retiring in 2005. Tragically, their son, Danny, passed away in an auto accident in 1976. Dick and Sylvia were divorced in 1992 after 34 years of marriage. Dick married Beryl Thiel in August 1993. They recently celebrated their 25th wedding anniversary. Dick was an avid outdoorsman, and enjoyed hunting, fishing, trap shooting, snowplaning in the Big Hole Valley and spending time in the mountains. Dick was a member of the Dillon Elks Lodge 1554 for over 58 years. He spent many of his retirement years volunteering at the Elks preparing meals for “Family Night”. Dick was well known for being a wonderful cook. Dick was a member of the NRA, Rocky Mountain Elk Foundation and a Shriner. He, most notably, was a kind man, who loved animals and enjoyed his family and friends. Dick was preceded in death by his parents, Jack and Flory; son, Danny; son-in-law, Art Mautz and recently by his wife, Beryl. He is survived by his children, Jackie (Craig) Taylor, David (Tracey) Roberts and Susan Mautz. Grandchildren Jacob (Airlynn) Taylor, Nicole (Matt) Steed, Joshua Taylor, Tyler and Allen Roberts, and Natasha and Christina Mautz. Great-grandchildren Kambria and Pierce Taylor, and Justin, Logan and Emily Steed. Memorials can be made to the Shriners Hospital, Barrett Hospital Foundation, or a charity of your choice. Funeral services will be held Monday, May 13th at 10:30 at the Brundage Funeral Home with burial in the Mountain View Cemetery. A luncheon will follow at the Dillon Elks Lodge.

The family of John Richard "Dick" Roberts created this Life Tributes page to make it easy to share your memories.

Send flowers to the Roberts family.