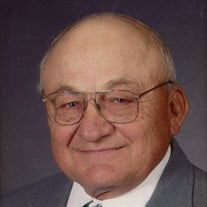 John Plutt Jr., 82, passed away in his sleep Sunday morning at his Dillon home. John was born in Dillon on Jan. 14, 1933, grew up in Dillon and raised his family in Dillon. He was hard working, honest, loved to talk and spent his life serving the community he loved. In John’s world, everything was “Fantastic.” John was the oldest of four children born to Austrian immigrants John and Katherine Plutt. A sister, Katherine, died in infancy. His brother, Martin, preceded him in death. His sister, Dorothy Zemljak, lives in Butte. John married Connie Finnegan, of Butte, in 1959. John and Connie celebrated their 56th wedding anniversary in August. Together they raised six children, and are the grandparents of 13 and great-grandparents of eight. A state champion marble shooter in his youth, John graduated from Beaverhead County High School and attended Western Montana College. John served his military commitment at the Fort Ord Army Base in California. He returned to Dillon to work the family ranch and gained employment with the U.S. Postal Service, a job he held until his retirement in 1988. John’s commitment to community service blossomed as a member of the Dillon Jaycees. The organization would recognize his efforts by awarding him the group’s Outstanding Young Man Award and Distinguished Service Award. He led Boy Scout and Cub Scout Troop #66 for many years. A life member of the St. Rose of Lima Catholic Church Knights of Columbus, he set turkey raffle ticket sales records for the group over a 50-year time frame that will never be broken. A life member of both Dillon Elks Lodge #1554 and Dillon American Legion Post #20, John was a successful membership recruiter for both groups. He was a longtime Elks Lodge board member and for almost 30 years chaired the Elks Hide Drive, the group’s most successful fundraiser. He was tabbed Dillon Elks Lodge “Member of the Year.” He served as an American Legion representative to the Dillon Cubs American Legion Baseball Board of Directors over 30 years, during which time two of his sons and three of his grandsons played for the baseball team. An irrepressible salesperson, John sold a world record number of Dillon Cubs raffle tickets during his association with the team. John volunteered time to the Dillon Food Pantry, picking up and delivering food to the pantry and also delivering food from the pantry to those in need who couldn’t get out of their homes. For his unselfish dedication to community service and making Dillon a better place, John was named the Dillon Tribune’s “2010 Dillonaire of the Year.” John enjoyed spending time on his Birch Creek property and considered himself the Mayor of Farlin. Farlin is now a ghost town and some of the town’s buildings are on his property. John is survived by his wife, Connie, and their six children: son John Patrick Plutt, of Dillon, and his children, Chance and Jordan Plutt; daughter Kathy (Mark) Simkins, of Dillon, and their children M.J. and Nathan Simkins; son Jim Plutt, of Dillon, and his daughters, Mindie Cameron, Courtney Leonard and Toni Kobriger-Plutt; son Ernie Plutt, of Billings, and his children, Ian and Ana Plutt; daughter Kelly (Martin) Osborne, of Dillon, and their children, Ashley and Marcus Osborne; and daughter Kristy (Dave) Anderson of Gooding, ID, and their children Jessi Bard and Dani Anderson. Great-grandchildren are: Pacey and Jaden Cameron; Alexis and Jason Leonard; Rainey Kobriger-Plutt; Avery and Graci Bard; and Constance Osborne. John enjoyed following the youth sporting careers of his grandchildren, particularly when they represented the Dillon Beavers and the Dillon Cubs. In lieu of flowers, memorials are preferred to the Dillon Cubs Field Project, P.O. Box 224, Dillon MT, 59725. A viewing will be held at St. Rose of Lima Catholic Church in Dillon 5–6:30 p.m. today, Wednesday, December 23. The Rosary will be at 6:30 p.m. and Vigil Service at 7 p.m. Funeral mass will be Thursday, December 24, at 12:10 p.m. at St. Rose with burial at Mountain View Cemetery. A reception will follow at the St. Rose Family Center.

John Plutt Jr., 82, passed away in his sleep Sunday morning at his Dillon home. John was born in Dillon on Jan. 14, 1933, grew up in Dillon and raised his family in Dillon. He was hard working, honest, loved to talk and spent his life serving... View Obituary & Service Information

The family of John Plutt Jr. created this Life Tributes page to make it easy to share your memories.

John Plutt Jr., 82, passed away in his sleep Sunday morning at...

Send flowers to the Plutt family.