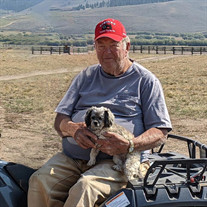 John August (Jack) Laden, 78, passed away peacefully on December 8, 2021 in Dillon, MT with his wife Phyllis by his side. He was born July 3, 1943 in Dillon, MT to John A. Laden and Ella Mueller Laden and grew up on the family farm southwest of Dillon. He began his schooling at Riverside Country School, then went on to attend public school in Dillon, graduating from Beaverhead County High School in 1961. Jack attended Western Montana College and graduated in 1968 with degrees in Art and Social Sciences. He taught school in Chehalis, WA for one year after graduation before returning to Montana to join the National Guard where he worked on helicopters for many years. Jack later went on to work as a helicopter mechanic for Air Logistics in Alaska and then working on helicopters on forest fires in the northwest US until his retirement. Jack met Phyllis (Jones) in 1976 and they were married in Virginia City, MT in August 1982. They made their home in Dillon where they raised their two children, Kali (1983) and Kade (1985). Jack had a love of airplanes, owning multiple planes over the years. When Kali and Kade were young, he often took the family out flying and would fly the kids to Dell for breakfast on occasion, which is a fond memory for the kids. Jack and Phyllis built a home and moved to Polaris, MT in 2008. Jack spent his retirement enjoying coffee with his many friends, mowing their 10 acres, tinkering on his three antique Ford tractors that he was fixing up for his grandson Wyatt, visiting with friends and neighbors, and spending time “walking” his beloved dog Muff. He was well-known in the community for his visits to friends around the Grasshopper Valley, always willing to lend a helping hand or just sit and chat for a while. He will be greatly missed. Jack is survived by his wife Phyllis, daughter Kali (Ryan Nosek), son Kade, two adorable grandchildren Wyatt and Lyla Nosek, his brother Tim (Susan) Layden, his sister Donnette Burns and many extended family and dear friends. Memorial services will be held at a later date.

John August (Jack) Laden, 78, passed away peacefully on December 8, 2021 in Dillon, MT with his wife Phyllis by his side. He was born July 3, 1943 in Dillon, MT to John A. Laden and Ella Mueller Laden and grew up on the family farm southwest... View Obituary & Service Information

The family of John (Jack) Laden created this Life Tributes page to make it easy to share your memories.

Send flowers to the Laden family.