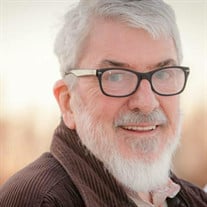 It is with heavy hearts that the family of John Richard Kerns announces his passing on Sunday, November 25, 2018. Jack, as he was always known, was 83 at the time of his passing. He leaves behind a very large family scattered all over the US and into Canada. His 7 children: Kathleen, Shawn, Tree, Patrick, Kelly, Alan, and Reyna. His 8 grandchildren: Autumn, Jeannette, Shawn, Natasha, Shawn Patrick, Aspen, Claude, and Liam. His 5 great grandchildren: Rain, Noah, Aspen Jr, Jack, and Annabelle. His 3 brothers: Donald, Thomas, and Bobby (Brother Brian Kerns); as well as 16 nieces and nephews, 23 great nieces and nephews, and many cousins. He was predeceased by his parents, Patrick Francis Kerns and Hermina Cecilia ("Minnie") Schierhoff, his sister Rosemary, and brothers Patrick Jr. and James. He also leaves behind the many friends who became family in the Twin Bridges, Dillon and Sheridan area, folks who cared genuinely about him and have expressed their heartfelt regard for Jack. Jack began his life in Pennsylvania and was in Montana when the end came. He spent several years in Colorado and especially loved living in the Walden area very much. It was there he fell in love with photography under the bright aspens and high mountains. He then moved to the Bitterroot Valley in Western Montana where he would spend the next 20 plus years. There, surrounded by the Bitterroot and Sapphire ranges, he created a little Eden around his home, growing gardens, trees and Wild rose bushes. He counted amongst his dearest friends the row of ancient massive cottonwood trees that lined the laneway. He loved putting his hands into the earth to coax his little gardens to grow. In the early 2000’s, Jack moved to a whole new place, the Ruby Valley in Montana. He found there a kindred spirit in the form of the Ruby River and loved to spend time just being quiet along its banks. He found a special place in the Ruby Valley and Tobacco Root Mountains. He touched so many lives in the Dillon/Twin Bridges/Sheridan area and shared his special, sweet wisdom. Tips for making the best apple pies, advice about many things to many people. He offered encouragement and when he listened, people knew he was truly hearing them. During his long life, Jack had many professions from electrician to handyman to construction. But his favorite of all was when he worked as a caterer in forest fire fighting camps. He spent many, many summers feeding the brave men and women who fight wildfires. When they arrived in camps, the first thing the firefighters checked was whether Jack was working the kitchens, knowing their meals would be wonderful and prepared by a person who cooked with love. He learned to cook from his mother, Minnie, and enjoyed nothing more than to prepare a meal meant to be shared and enjoyed. Jack’s last years were hard on him but he rarely complained. He shared many conversations about dying with his family and friends. He always saw dying as another facet of living and he was even curious about what happens next. He was ready to make the journey and welcomed it. He strove to make sure his children, family and friends were also at peace with the idea of his passing, and we were. What a gift! Jack has donated his remains to science so it will be some time before the family has his remains in order to have a celebration of life. When that time comes, the family will announce the details here. In the meantime, Jack would want us to celebrate his life with music and dancing and joy in our memories of him, to find the beauty that is in us and around us all, and to live in peace and kindness. That is the best way to honor him. In the meantime, the family will be lighting a candle on the Solstice from our individual locations as a way to celebrate Jack’s life. The Solstice falls on Friday December 21 between 3-330pm, so that’s when the candles will be lit. The family would like to invite anyone who knew and loved Jack to join us in lighting a candle, maybe play some of your favorite music and do a little dance. Jack would love a tribute like that. “He had the eyes of a painter, Heart of a maker of songs. His words fell like rain on the dry dusty plain, Precious and so quickly gone.” -Eyes of a Painter, Kate Wolf

It is with heavy hearts that the family of John Richard Kerns announces his passing on Sunday, November 25, 2018. Jack, as he was always known, was 83 at the time of his passing. He leaves behind a very large family scattered all over the US... View Obituary & Service Information

The family of John "Jack" Kerns created this Life Tributes page to make it easy to share your memories.

It is with heavy hearts that the family of John Richard Kerns...

Send flowers to the Kerns family.