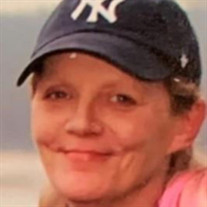 Jodie Oswald Harris August 26, 1971 - January 11, 2022 Obituary Former Montana resident Jodie “Jo” Pauline Oswald Harris, age 50, died at home on January 11, 2022, in Moose Creek, Alaska. Jo was born August 26, 1971, in Butte, Montana to Joseph (deceased) and Rosemary Lenegar Hall. Jodie was adopted at a young age by her lifelong father, Richard Oswald. Jodie attended Beaverhead County High where she was very active in sports such as basketball and volleyball. She attended WMC while working various jobs in Dillon. Jodie went on to graduate from Airline Academy in Vancouver Washington and became a flight attendant, but her love for adventure took her on a new path to Alaska where she met her husband, Daniel Harris. They dated for several years and were married in 2005. She loved Alaska and had many adventures with her family. She was known for taking in extra children into her home as well as rescuing animals until homes could be found. Jodie was a 23 year survivor of MS and made sure her family was the most important part of her life. Jodie is survived by her husband Daniel Harris, her daughter, Morgan Harris, and son Cade Hamilton (Ashley Ward) and her granddaughter Chloe Hamilton, all of Moose Creek / North Pole, Alaska. Dan's parents, Buck and Betty (North Carolina), Sisters-in-law Rachel (Anchorage Ak) and Nova (Fairbanks AK). She is also survived by her parents Richard and Rosemary (Lenegar) Oswald of Dillon, Montana. Her sister Leslie Dawson (Aaron) of Spokane, Washington. Her sister Teresa Smith (Mike) of Bonners Ferry, Idaho, and her brother Nathan Oswald (Shannon) of Dillon, Montana, as well as many neices, nephews, aunts and uncles. Jo will always be remembered for her love of animals, her lively spirit, and quick wit. She will be geatly missed by family and friends. In memory of Jodie Pauline, contributions may be made to the MS Foundation. Arrangements are entrusted to Fairbanks Funeral Home.

The family of Jodie Oswald Harris created this Life Tributes page to make it easy to share your memories.

Send flowers to the Harris family.