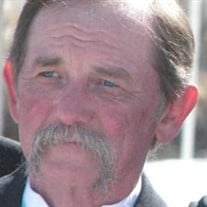 James Michael Moses, 66 of Dillon, Montana passed away at his residence after a lengthy illness. He has battled with ill health since his stroke in 2009. He was born on January 3, 1952 in Richland, Washington to Jack M and Shirley Ann (Buster) Moses. He was blessed with 3 children; Britnee, Toby and Colter from his first marriage to Debbie N. Dudley. They were married in December of 1979 and later divorced in May of 1987. Moe started welding in 1977 and practiced his trade in 49 of the 50 states. He obtained his welding certificate from Idaho State University and has held certificates in Mig, Tig, Stick, ARC, as well as, an Underwater Certificate. He started welding in 1977. He was taken to Alaska to work on the pipeline by Western Weld Tech’s as lead welder who gathered a crew of the best welders with him to go to Alaska. His favorite place was Alaska and while he was there he was ranked #5 in the United States of Top Welders. Moe proudly served his country in the US Army as a Gunner in Germany. He loved the outdoors and enjoyed fishing, elk hunting, traveling and war history. He had a special place in his heart for his grandkids. Moe is preceded in death by his parents, 1 grandchild and brother Cal. He is survived by his children; Britnee (Jake) Moses Butte of Avon, Montana, their children; Madee, Macee and Halee-Joe, his son, Toby “Tyler” (Kristen) Moses of Kimberly, Idaho and their children; Ryker, Rylan, and Jerik, and son, Colter ”Toad” (Brittany) Moses of Leador, Idaho and their children Kaebrynn , Braylei and Boede. His siblings; Kandie (Donny) Thorton of Oregon and Kelly Moses of Washington. There will be a service scheduled later in the spring in Pocatello, Idaho. The family would like to extend their thanks to the staff at Barrett Hospital and Healthcare and our dear family friend Lisa Green.

James Michael Moses, 66 of Dillon, Montana passed away at his residence after a lengthy illness. He has battled with ill health since his stroke in 2009. He was born on January 3, 1952 in Richland, Washington to Jack M and Shirley Ann (Buster)... View Obituary & Service Information

The family of James Michael Moses created this Life Tributes page to make it easy to share your memories.

James Michael Moses, 66 of Dillon, Montana passed away at his...

Send flowers to the Moses family.