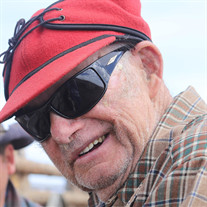 Goodbye for Now On Monday, Sept. 2nd, 2019, one of the great cattlemen of Beaverhead County and the American West, James David Marchesseault, passed away in a fitting manner, working the Birch Creek ranch he called home for more than 50 years. He was 81 years old. Jim was born in Dillon, Montana on January 24th, 1938, the fifth in a brood of six rambunctious boys and girls raised on the ‘FS’ in the Grasshopper Valley. Following in the family footsteps he eagerly embraced life on the ranch, proving himself as a natural stockman. He loved working in the timber and was truly in his element mowing hay. As Jim came of age, he served in the US army and Montana National Guard, earning an honorable discharge as Master Sergeant. A fiercely proud American, he would continue for decades to honor our Country as a member of the American Legion. While still a bachelor, Jim and good friend Howard Begin were known to go deer hunting from time to time and rumor has it that these excursions involved burrowing into a haystack where a fence panel was ‘accidentally’ left open. Those kinds of hijinks slowed down after a summer evening in 1965, when Jim left the hayfield to attend a square dance at the Club Royal in Dillon, where a beautiful young California lady named Louise Aspesi caught his eye. Her first impression was that, “He was kind of scruffy but was incredibly well-mannered for a cowboy.” Apparently the good manners won out because the two were married on December 23, 1967, raising a fine family of four children, which has grown to include five grandchildren, not to mention a vast menagerie of dogs, cats, and various other beloved pets. Amidst the hubbub Jim also attended to civic duties as a member of the Reichle School Board, the 4-H and other local organizations. Jim was preceded in death by his parents, Robert Dewey and Cora Marchesseault – sister Estelle Blomquist – and daughter Brenda Weber. He is survived by his wife, Louise – children Jenifer, David and Romeo – his grandchildren, Grace, Claire, Victoria, Ava and Adriana – and his siblings, Claire, Robert, Jules and Gordon. A memorial service will be held at the Methodist Church in Dillon at 2PM followed by a community reception at the Elks Lodge on Saturday, September 14. A tribute to the man whose way of bidding farewell was simply to say, ‘goodbye for now’. In lieu of flowers, donations can be made to Grace Methodist Church.

Goodbye for Now On Monday, Sept. 2nd, 2019, one of the great cattlemen of Beaverhead County and the American West, James David Marchesseault, passed away in a fitting manner, working the Birch Creek ranch he called home for more than 50 years.... View Obituary & Service Information

The family of James David Marchesseault created this Life Tributes page to make it easy to share your memories.

Send flowers to the Marchesseault family.