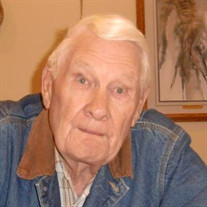 James R Harmsworth, a man many people called their friend, has gone to his final home in heaven. Jim was born, March 1, 1930 in the living room of the family ranch house at Hastings, Colorado, the middle child of 3 boys. He graduated from High school in 1947 in La junta Colorado. He first came to Dillon in 1947 to ride bucking horses at the Labor Day Rodeo. As he tells it, he was bucked off and was broke. He called his dad for money and was promptly advised to get a job. He met Adolf Pahnish, who was in town looking for a haying crew. He worked on the Pahnish ranch near Bannack running a horse drawn mower until all the hay was up. Driving a Studebaker and with $130 in his pocket, he headed to Elko NV. He worked for Tom Marvel who had a huge ranch. He then went to work for the Circle L in Lovelok, NV and remembers eating good all winter. He then worked for E.L. Cord. He told his boss he wanted to go out with the wagon and brand cattle. He stayed until the wagon came in July. In 1948, he joined the Marines in Klamath, OR and then went to boot camp in San Diego. He spent most of his time in Guam until his discharge in 1951. He was trained as a scout Sniper but said he never used it. He said he saw the commanding officer enough they were on a first name basis. He was proud of a certificate he received showing that out of 75 men, he was the most outstanding. Jim was a self-trained Mechanical Engineer and Master Machinist and owned or ran several companies in northern California. His friends, who were lucky enough to have Jim cook for them, will tell you that he was a gourmet cook, having trained nights at the Le Cordon Rouge Culinary School in Sausalito, California. When asked if he’d ever been married, Jim would answer “Oh 4 or 5 times, I can’t remember”. His greatest love was horses and training them in the Ed Connell ways, women and cooking. He jokingly said he wasn’t any good at any of them. He trained in Hackamore and spade bitting like the early Vaqueros. Jim moved to Dillon in 1997 and has spent the last 20 years in La junta, Colorado, Dillon, Dell and Lima, MT moving every couple of years always adding to his long list of friends. Jim was preceded in death by his Dad and Mother, Clarence Ray & Mercy Ann Harmsworth, brothers Ray Jr and Daniel, his mentor Walter Fanning and numerous cousins and friends. Jim kept his friends laughing with his great sense of humor and stories. He will be greatly missed by his special friends at Best of the West Properties, Schwartz Boots and the Yesterday’s Calf-e and many others. Please join his friends and loved ones at Brundage Funeral Home on Tuesday, November 8 at 2:30 p.m. for a memorial service and to share stories. Graveside services and burial will be the following week in Las Animas Colorado.

James R Harmsworth, a man many people called their friend, has gone to his final home in heaven. Jim was born, March 1, 1930 in the living room of the family ranch house at Hastings, Colorado, the middle child of 3 boys. He graduated from High... View Obituary & Service Information

The family of James R Harmsworth created this Life Tributes page to make it easy to share your memories.

James R Harmsworth, a man many people called their friend, has...

Send flowers to the Harmsworth family.