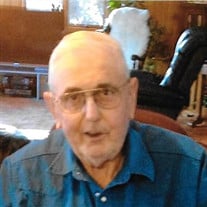 James Eighorn passed away on the 7th of November at his home in Maidenrock surrounded by his family and a lifetime of treasures, deemed priceless with historic values by none other than the old storyteller himself. Jim was born to George(Shorty) and Mabel Eighorn on the 24th of May, 1933 in his Grandma Seidnick’s house in Butte, Montana. He grew up at the ranch west of Melrose until it was sold, and shortly therafter, his father passed away from Rocky Mountain Tick Fever leaving him pretty much on his own at the ripe old age of fourteen. He worked on various ranches around the valley into his late teens. This is when he met Miss Gloria May Dupuis. They were married on February 18, 1952 and the tall, lanky teenager became a jack of all trades, which included, but was not limited to ranching, mining, and crane operating, and doing whatever it took to provide for his wife and children. A history buff by nature, Jim spent a lifetime gathering and collecting historic artifacts from the surrounding area and beyond, pouring over The Hecla Mining Company’s ledgers, diaries and cancelled checks, and constantly searching for something he might have missed. Dad will be remembered by his wit and charm (or not so much) and a dry sense of humor, and his ability to turn a good story into a great story. He will also be remembered by his uncanny ability to not only create and build, but to also fix and repair anything that friends and neighbors would bring over. He was a lifelong member of the Church of the Big Hole and his life was a witness to his faith in God. Jim was preceded in death by his wife, Gloria, their son, Jess, and his brother, Donald Bechtold. He is survived by his children, Julie (Larry) Boksich, Toni (Dixon) Robison, Marta Nicholls, and Luke (Joel) Eighorn; 15 grandchildren and 13 great-grandchildren; as well as sister, Margaret Epperson, sister-in-law Ann Bechtold, sister-in-law Eddie Lou (Dean) Stanchfield, brother-in-law Dennis (Helen) Dupuis, brother-in-law, Russel (Donna) Dupuis, sister-in-law Vicki (Dan)Heckford and numerous nieces and nephews. A visitation is scheduled for Friday, November 13 at Brundage Funeral Home, 300 S Atlantic St. in Dillon from 5 – 8 PM with a vigil service between 6:30 and 7. Services will be held at 11:00 a.m. Saturday, November 14 at the Church of the Big Hole in Melrose. Memorials may be made to the Church of the Big Hole, P.O. Box 52, Melrose, MT 59743, or the Melrose Volunteer Fire Department, P.O. Box 99, Melrose, MT 59743. Special thanks goes to Dr. McIntyre and her nurse, Laurie Butori, Dr. Pickens, Barrett Hospital Home Healthcare, as well as his caregivers, Peggy, Brenda, Frances, and Joan.

James Eighorn passed away on the 7th of November at his home in Maidenrock surrounded by his family and a lifetime of treasures, deemed priceless with historic values by none other than the old storyteller himself. Jim was born to George(Shorty)... View Obituary & Service Information

The family of James George Eighorn created this Life Tributes page to make it easy to share your memories.

James Eighorn passed away on the 7th of November at his home...

Send flowers to the Eighorn family.