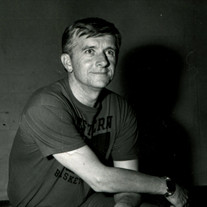 James Corr 1931-2017 Jim (Lefty) Corr, loving husband, father, teacher, artist, jock and coach passed away on September 19 doing what he loved…. walking down the ninth hole after a great drive. Jim was born on February 13, 1931 in Missoula, Montana. He was the oldest of five children. He and Bill Corr, Sister Marie Corr, Donna Byler, and Eilene Willett (Ken) were all raised in Missoula. Jim attended Western Montana College where he earned his degree as an art and English teacher. After marrying his best friend and childhood sweetheart, Peggy Rolfe, and pitching “a very important game” the day after the wedding, the couple spent one year in Dillon where their oldest son, Dan, was born. Upon graduation, they moved to Whitewater, Montana where he taught and coached for two years. There his son, Mick, was born. Jim was strongly encouraged to move to Joplin, Montana when his very patient wife refused to spend another winter in Whitewater. Jim taught and coached in Joplin for six years. During this time, his daughters Kathy (Hilton) and Patty (Seidensticker) were born. In 1961, he earned his master’s degree from the University of Montana before moving to Dillon in 1963 when Jim took a teaching and coaching position at Beaverhead County High School. There he coached basketball, football, track, and golf. Their fifth child, Ginny (Waldorf), was born in Dillon. One of his proudest accomplishments as the BCHS Athletic Director was the designing of the BW Lodge gymnasium. In 1970, Jim became a well-respected and admired professor at Western Montana College where he taught for 24 years. He greatly enjoyed training future teachers in his passion for art. He also enjoyed a very successful career as an assistant men’s basketball coach and head women’s basketball coach. He was inducted into the Bulldog Athletic Hall of Fame honoring him for his success as a pitcher in his college days at Western. While he was quite proud of this accomplishment, he was even more proud when he was inducted into the University of Montana Western Teaching Hall of Fame in 2015. Jim is survived by his wife, Peggy, and children Dan (Mary), Kathy, Patty (Jeff), and Ginny (Tom). His son, Mick, passed away a couple of weeks ago. His legacy will live on in them, as well as his eight grandchildren, and the numerous students and athletes whose lives he impacted over the years. His sage advice and quick wit will be deeply missed. A memorial service will be held at the Beaverhead Golf Course on Monday, September 25 beginning at 6:30. One final major accomplishment for which he was quite proud and spoke of often……”I raised five kids, three of which were girls, with one bathroom!”-Jim Corr

The family of James Corr created this Life Tributes page to make it easy to share your memories.

Send flowers to the Corr family.