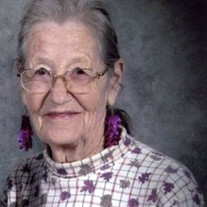 Jacqueline Lee Eddie died at home on May 2nd at the age of 80. Jackie was born on September 12,1934 at her aunt's home in Miles City, Mt. She was the oldest daughter of Lloyd "Red" and Evelyn Dodd. She moved numerous times with her parents as they searched for work. Before her family settled in Dillon in 1938 her father had many jobs and their family had increased by two more. Her brother James was born in 1936, and her brother Jerry was born in1938.  Jackie attended Elementary, Junior High, and High School in Dillon. She married Paul Hanson in 1952 and they moved to Utah for a year then moved back to Dillon in 1953 where their first daughter (Debbie Jean) was born on July 2,1953. Paul worked with Jackie's father  around the area on local ranches. On July 25,1955 they had their second daughter (Rose Marie). In the winter of that year Jackie & Paul divorced. On July 22,1956 Jackie married William Dee Eddie, they went on to have a son, (Robert Leroy) on July 17,1957. Unfortunately they lost a son and a daughter shortly after birth in the four years that followed. On September 1,1961 they were blessed with their final son (Jack Dee). Jackie worked as a waitress for many years and she was a dispatcher for the Dillon Police Department for several years. She taught water aerobics for many years. Jackie loved to do many craft projects, work in her flower beds, and go camping with her family. She enjoyed snowmobiling and motorcycle riding and loved to fish.  One of her favorite passions was bowling for which she won many awards and trophies. She bowled for over 40 years until her body just wouldn't let her anymore. She kept her sense of humor until the end.  She was preceded in death by her parents Red & Evelyn Dodd, her daughter Debbie Blaseg, and the son & daughter she lost shortly after birth. She is survived by her husband of almost 59 years (William Dee Eddie), her brothers and sister-in-laws James & Joan Dodd and Jerry & Evelyn Dodd, her three children. Her daughter and son-in-law Rose & Dale Sumner of Manhattan, son Robert Eddie of Dillon, and son and daughter-in-law Jack & Heather Eddie of Dillon. She also has 10 grandchildren and 10 great grandchildren, and numerous nieces and nephews. Come celebrate the life of Jackie with us at the Brundage Funeral Home at 1:00pm on Friday May 22,2015. A special thanks to Robert Eddie for the amazing care he has provided for our family over the last 6 years. $(document).ready(function(){ });

Jacqueline Lee Eddie died at home on May 2nd at the age of 80. Jackie was born on September 12,1934 at her aunt's home in Miles City, Mt. She was the oldest daughter of Lloyd "Red" and Evelyn Dodd. She moved numerous times with her parents as... View Obituary & Service Information

The family of Jacqueline Eddie created this Life Tributes page to make it easy to share your memories.

Send flowers to the Eddie family.