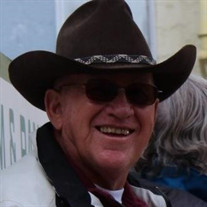 “Jack has gone home” Jack Champine – 7/26/1938-1/30/2019 Jack was born in Darby, MT, July 26, 1938, to Jim and Angie Champine. Jack attended grade school in Darby, and graduated from Anaconda Central, in 1956. He immediately enlisted in the US Navy, and served his Country from 1956 to 1958. After returning from the Navy, Jack married and had four children. In 1971, Jack moved to Dillon, MT, and on July 10, 1977, married the love of his life, Myrna J McCarthy. Jack managed Dillon Livestock from 1971 to 1980, when he, Myrna, and brother Joe, began C & C Farm and Ranch Supply, in Dillon. C & C remained on the same corner for 31 years, until Jack and Joe retired in 2011. When Jack was not enjoying the outdoor, he was active in the community as a member of the Jaycee’s, serving on City Council, as well as many other organizations. Jack was very passionate about the 4-H program, and enjoyed mentoring the 4-H members with their livestock projects. Jack was a member Knights of Columbus, and St. Rose of Lima Catholic Church. Jack passed away on Wednesday, 1/30/19, in Twin Falls, ID, due to complications from Parkinson’s. Jack is preceded in death by both his parents, brother Jimmie, and daughter, Cindy. Jack is survived by his loving wife, Myrna, brother, Joe (Sharon), sisters, Janice and Melody (Hank). Children, sons, Bill (Paula), Christian, daughters, Kelly (Jim), Connie (Mike), Cheri (Scott). Jack is also survived by 13 grandchildren and 14 great grandchildren. Services for Jack will be held at St. Rose of Lima Catholic Church, in Dillon, on Tuesday, 02/12/2019, at 12:10 pm. A private burial will take place at a later time. Memorial donations may be made to Hospice, Beaverhead County 4-H, or the charity of your choice.

The family of Jack Champine created this Life Tributes page to make it easy to share your memories.

Send flowers to the Champine family.