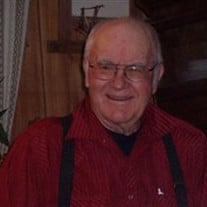 John T. Nelson "Tom" passed away peacefully at his home in Dillon, Montana on Saturday, March 7, 2015 at the age of nearly 89. Tom is survived by his children, Sandee Nelson of Wisdom, Jacqi (Sean) Dickens of Dillon & Teddy (Lee Anne) Nelson of Darrouzett, TX; siblings, Jay of Jackson & Bill of Missoula. Grandchildren, Reba (Scott) Campbell, Shelby, Teresa, Sage, Ellis, Brody, & Isabella, as well as numerous nieces & nephews. He is preceded in death by his parents, Fred & Margaret Nelson. Tom was born on April 26, 1926 in Butte, MT. He graduated from Beaverhead County High School in 1944 as part of the first class that completed all four years in the current building. He then joined the U.S. Army and served as a paratrooper in occupied Japan during WWII. After his honorable discharge Tom worked on multiple ranches in CO, WY, and MT before returning to his beloved Big Hole Valley where he started The Willow Ranch, a dude ranch for teenagers. Each youth was assigned a horse to be their own during the 5 weeks they were in Montana. During winters he and his brothers, cousins & friends transported the horses to AZ where he used them in riding stables. He was also an outfitter before going to work for the State highway department, which helped him raise three children as a single Dad. He was always someone you could count on if you needed something built or fixed around your home or ranch. Tom continued to contribute to his community as a charter member of VFW Post #9040, as an active member & Post Commander of the American Legion Post #90, he was a hunters safety instructor for years and many locals will remember him as an avid Beaver fan. His children remember him as a devoted parent & grandparent who brought smiles & joy to those around him through his witty comments and loving heart. His positive attitude was an inspiration to others. A memorial service will be held at The Masonic Lodge in Wisdom at 2:00p.m. on Saturday, March 21, 2015, with a potluck reception to follow at The Wisdom Community Building. All are welcome to attend and celebrate Tom's life. In lieu of flowers, please send donations to the Veterans Administration of Montana at 3687 Veterans Drive, POB 1500 Fort Harrison, MT 59636, or Senior Companion Program of Dillon BVRHD Co. Health c/o Sue Hansen 41 Barrett St. Dillon, MT 59725. The family would like to thank the VA for their assistance & care, the Senior Companion Program for their compassion and dedication and the American Legion Post #20 for the Health Care Equipment Project. $(document).ready(function(){ });

The family of J. Thomas Nelson created this Life Tributes page to make it easy to share your memories.

John T. Nelson &quot;Tom&quot; passed away peacefully at his home in Dillon,...

Send flowers to the Nelson family.