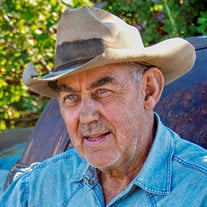 Harold Dean Peterson, age 83, passed away peacefully surrounded by his family at his home on December 4, 2018. He will be remembered for his love for his family, passion for ranching, and willingness to serve in the community. Harold was born October 14, 1935, in Logan, UT, to Alfred and Emma Peterson. He was raised with his three brothers on the family ranch in the Big Hole Valley. After graduating from Beaverhead County High School in 1954, Harold began ranching in the Big Hole. On November 14, 1959, Harold married Margie Holland, and together they raised four children. Harold loved the ranching lifestyle and was willing to share it with many. Experiences on the ranch shaped the lives of all who visited, and especially for those that came to work on the ranch for several summers. Many youthful perspectives were changed to those of an adult because of Harold’s mentoring. He served Beaverhead County as a member of the Planning Board, Solid Waste Board, and Big Hole Watershed Committee. He worked with the Soil Conservation District, County Weed Control, Forest Service, and DNRC to better the land while preserving the ranching lifestyle. Harold was also a Board member of Westland Bible Mission and helped build Clark Canyon Bible Camp. Harold’s favorite pastime was fishing. He shared his favorite fishing spots with his children and grandchildren, which often included a pack horse camping trip to a mountain lake of the west Big Hole. Harold also had many fall fishing trips to the Kenai in Alaska where his brother Darwin and Geneese lived. His brother John and cousin Russell always went with him, together with other friends or family that wanted to fish. They always came back with boxes of fish and enough stories to last until the next fall. Harold also enjoyed many mountain horse trips with friends. They would ride up a drainage of the west Big Hole Valley, over the Continental Divide, spend the night in Salmon, ID, and then ride back home the next day. Neighbors Dick and Jack Hirschy would plan the route each year, trying to find every trail over the top that could be ridden. They always made it, but sometimes it was debatable if the trail really was for horses. Harold was preceded in death by his wife Margie, parents Alfred and Emma Peterson, and brothers Darwin and Richard. He is survived by his brother John Peterson; sister-in-law Geneese Peterson; children Gina (Jim) Kropp, Lisa (Joe) Nabity, Dean (Dianna) Peterson, and Clay (Stephanie) Peterson; grandchildren Ashley (Graydon) Curry, Ryan Kropp, Kelsi and Amber Nabity, Alfred, Malcolm, and Jon Peterson, Morgan (Luke) Halliburton, Jordan, and Luke Peterson. The family has a special thank you for Dr. Ron Loge and Home Health nurses Debby Hursh and Nancy Thompson, who made it possible for Harold’s family to care for him at his home on the ranch. Arrangements are in the care of Brundage Funeral Home. In lieu of flowers, memorials may be made in Harold’s name to Westland Bible Mission, 250 Camp Trail, Dillon, MT 59725, or to Barrett Home Health and Hospice, 600 HWY 91 S, Dillon, MT 59725.

Harold Dean Peterson, age 83, passed away peacefully surrounded by his family at his home on December 4, 2018. He will be remembered for his love for his family, passion for ranching, and willingness to serve in the community. Harold was born... View Obituary & Service Information

The family of Harold Dean Peterson created this Life Tributes page to make it easy to share your memories.

Send flowers to the Peterson family.