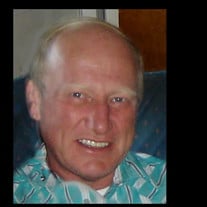 On March 17th, 2022, Glenn Reinhard Kincaid Sr. passed away peacefully in his home located in Jackson, Montana. Glenn Sr. was born on July 13th, 1952, to Cecilia Ann (Bates) Kincaid and George Kincaid Sr. Glenn Sr. attended Great Falls High School and graduated in 1970. He continued his educational career at Montana Tech in Butte formerly known as Montana State School of Mines. He spent his entire life living, working, and enjoying the Big Sky Country. Glenn spent over 30 years working for Burlington Northern Santa Fe (BNSF) as a railroad conductor. He was dedicated to his role as a conductor while raising a family and maintaining his family apartment rentals. Glenn Sr. married Carlena Rose Kelleher in 1970 and raised a family of four in their early years of marriage in Butte, Montana. Glenn and Carlena later moved to Great Falls where they raised four children. He taught his children many valuable lessons in life, and most importantly he taught his children to love the mountains and experience the great outdoors. Glenn was a mountain man and lead by example. He loved mining, fishing, hunting, hiking, and barbequing New York steaks for his family. Glenn also loved animals. He raised his children with German Shephard dogs and cats. Glenn and Carlena later divorced, and he continued his working roles while supporting his children through college. He had a dream to move to the Montana/Idaho border after he retired. He wanted to spend the remainder of his life surrounded by mountains and fresh air. Glenn did just that and nobody was going to stop him! He was extremely determined and passionate about his lifestyle choices. Glenn Sr. is survived by his brother, Gregory Kincaid (Great Falls), his four children, Glenn Kincaid Jr. (Great Falls), Scott Kincaid (Great Falls), Leslie (Brenda) Kincaid (Anchorage, AK), and his daughter, Holly Kincaid (Great Falls), and his three wonderful grandchildren, Kelsey Kincaid (Great Falls), Katie Kincaid (Great Falls), and Cassidy (Torrez) Kincaid (Oceanside, CA). Plans for a Celebration of Life are being finalized for the summer of 2022 in the wonderful Montana mountains.

The family of Glenn Reinhard Kincaid created this Life Tributes page to make it easy to share your memories.

Send flowers to the Kincaid family.