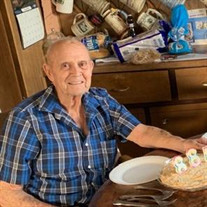 George Irvin Eby was born to Ben & Myrtle Eby in Clyde Park, Mt on July 22, 1933. He joined brother Herb & sisters Violet and Betty. The family lived in numerous places in the US as Ben moved the family to construct roads for this country. George graduated from Park High School in Livingston, MT from there he was drafted into the Korean war stationed in Korea. After serving 2 years, he returned to Montana and followed in his dad's footsteps building roads around Montana. He was working in Dillon, MT when he met the love of his life, Verona Nettik at the Club Bar. They were married on Aug 1, 1958 and welcomed Sandi and Ed into their family. George worked hard during his time in construction often times going away for a week at a time but always coming home every weekend to spend time with the family. He and Verona spent many years bowling and determining who would be the "boss" of the day by playing 3 games of cribbage every morning they were together. George delighted in taking his love to Jackpot, Las Vegas, Laughlin, Mesquite and even Fort Hall when the urge hit. George retired from highway construction, and promptly went to work for the city of Dillon reclaiming holes for the dump. He very much enjoyed working with all the people there. He gave it up in 2013 but was often brought back for special projects. He was a lifelong member of the Dillon Elks and was in later years referred to as "Coffee George" as he was the provider of coffee during the family night dinners. He very much loved interacting with all the people who came in to the Elks for all their events. George was proceeded in death by his parents, siblings and beloved wife, Verona in 2018. He is survived by his daughter, Sandi, son Ed, granddaughter Lindsey(Paul) Neal and 6 great grandchildren, grandson, Evan, special nephew Denny Adams, nieces Diane Thompson, Linda(George) Hucke, Vicki Jo (Larry) Boals and best friends Leo & Frieda Barnett

George Irvin Eby was born to Ben & Myrtle Eby in Clyde Park, Mt on July 22, 1933. He joined brother Herb & sisters Violet and Betty. The family lived in numerous places in the US as Ben moved the family to construct roads for this country. George... View Obituary & Service Information

The family of George Irvin Eby created this Life Tributes page to make it easy to share your memories.

Send flowers to the Eby family.