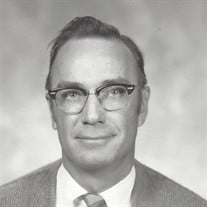 Gaines Richard McCracken April 12, 1930 to April 10, 2016 Gaines Richard McCracken (Dick), 85 passed away in his home in Polaris, Montana on April 10, 2016 of cancer. Dick was born April 12, 1930 in Dillon, Montana to T. Lee and Phyllis McCracken. Dick’s entire life has been identified with skiing, starting when he was just four. Many consider Dick as one of the founding fathers of skiing and ski hills in the area. His family acquired Elkhorn Hot Springs in 1942 to allow his family close access to skiing and this began a lifelong joy for for hiking, skiing, swimming and the Grasshopper Valley. He attended Dillon schools through high school, continuing to college at the University of Montana. He was a success at multiple ski team events and competitions, with ski jumping being his favorite. When he returned to Dillon after college, he became a ski team coach and mentor culminating in national awards. He was also a key part of the McCracken Brothers clothing stores in Dillon and Bozeman. Dick made several civic contributions to the community, including starting the J.C. Little Skiers Program and Vice President of the National US Ski Association. In 1972 he married Marcia Stish, his true love and companion. He traded in the city life for one in the Elkhorn area. They had two children, Megan and Ryan, and were owners of Rainy Mountain (now Maverick Mountain). Dick received the Montana Small Business Association businessman of the year award for his work developing the skill hill. After the ski hill, Dick moved on to other ventures, including logging, land reclamation and a family saw mill. His parents and a brother Joseph W McCracken preceded him in death. Dick is survived by his wife, Marcia and their two children, Megan (Burke) Nelson grandchildren Danika and Mckall and Ryan (Jenny) McCracken grandchildren Liam and Colin. He is also survived by two daughters of a previous marriage Vicki (John) Cornish grandchildren Carrie, Kevin, Clint, Krista and Courtney and Nancy Winstead, grandchildren Jamie, Tonia, and Stormi and numerous great grandchildren. A public memorial celebration at Elkhorn Hot Springs is scheduled from 4:00-8:00 pm Saturday, April 23rd.

The family of Gaines Richard McCracken created this Life Tributes page to make it easy to share your memories.

Send flowers to the McCracken family.