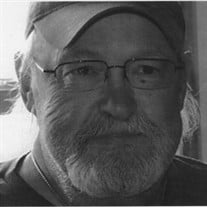 Frederick T. “Butch” Girard of Dewey, MT went to his art studio in heaven Sunday, March 21, 2021 as a result of a heart attack. He was born November 17, 1954 at St. James Hospital in Butte to Frederick L. “Butch” Girard and Martha A. May. Butch was raised in Dillon, MT and was quite an athlete for the Dillon Beavers, holding school and state records for a time in shot put. He was also an outstanding football player receiving a unanimous coaches choice for the 1973 East West Shrine game both on offense and defense. He received a scholarship to Montana Tech to play football but suffered a knee injury while being scouted by his beloved Green Bay Packers. So, in 1974 it was off to the Army where he served in Germany in the 708th Maintenance Battalion working on American tanks. He received several commendations for outstanding performance. He learned how to parachute while there and had a love for sky diving much to his Mother’s horror. Upon completion of his military service he worked in Afton, Iowa in his family’s excavating business. It was in Iowa where he reconnected with his musical talent and toured the Midwest as a lead guitar player with a band named 2nd Time Around. Butch was very proud that he was able to support his family doing something that he dearly loved. He played with several other bands, the last being the Rejects with good friend, Justin Stanchfield. Butch always felt very fortunate to have moved back to Montana in the early 90’s. He worked as a mechanic for several businesses. Butch then found the profession he loved and dedicated himself to the most - law enforcement. He began his new career as a Detention Officer at Beaverhead County which lead to becoming a Deputy Sheriff, a Dillon City Police Officer, and retiring as the head Detention Officer in 2014. Butch was an amazing artist; he enjoyed airbrushing, painting, carving and was proud of creating the logo used by the Jack Pine Savages Snowmobile Club. Butch was often described as a gentle giant and was known for treating everyone equally. He loved nature of any kind, especially bald eagles. Butch loved telling stories and if you didn’t get it the first time you didn’t worry because after a couple of beers you would hear it again. Butch is survived by the love of his life, Sandy; his “Dad” Dan Regan; children, Danny (Kim), Robbie, Chase & Tyler. His stepchildren Tara (Justin) Forsberg and Charlie (Cara) Barth. Grandchildren Abby and Aidan Girard, Lexi and Lauren Welch, Sidney Forsberg, Molly Barth and Stella Girard. Sisters Ruthanne Rouse, Laurie Girard, Georgia (Doug) Pettit, Lisa (Scott) Tessum, Kathy (Pat) Shanon, Coreen Meredith Perez, Charlene Price, Connie Girard, Michele Girard and brother Mike (Jackie) Girard. Precious nieces Christy Nyland, Mandy McCarthy, Alison Grandfield, Erin Hardesty, Brenda Willett and Dana Yonkers. Precious nephews Brandon Pettit, Blake Pettit, Bobby Eamon and Cody Miller. He was predeceased by his Father, Mother, and younger Brother, Charles “Chuckie” Deputy III. Services are pending and will be announced when the road to the Dewey cemetery thaws. Memorial contributions may be made to the Veteran's organization of your choice, the Dillon Food Pantry or St. Jude Children's Hospital. Rest in peace our wonderful man. You will be greatly missed. There will be a graveside service scheduled for June 10th, 2021 at 2:00 PM at the Dewey Cemetery.

The family of Frederick "Butch" Girard created this Life Tributes page to make it easy to share your memories.

Send flowers to the Girard family.