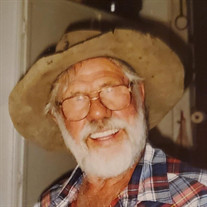 Frederick C. Brown Jr. Longtime Dillon resident, Fred C. Brown, passed peacefully on January 12, 2022, surrounded by family. Fred was born in White Sulphur Springs, MT on March 16, 1934 to Fred C. Brown Sr. and Lulella G. (Finn) Brown. He worked on the railroad at a young age and then joined the Army and served during the Korean War in the 7th Armored Division, 94th Medium Tank Battalion. Upon his return from the Army, Fred worked as a rough and tumble cowboy, riding trails and breaking outlaw horses. He also lived in Seattle and worked for Boeing for a short time with his brother Larry. He was a big brother his siblings loved and looked up to. He met his wife Jody Woodhull in Livingston, MT. They were married on September 3, 1955. They were blessed with two children, Johnnie and Ronny, and traveled around Montana until settling in the Dillon area where they worked together to build a successful fencing business. Aside from building fence, Fred was also a logger for many years. Fred enjoyed saddle making, leather work, and he and Jody liked to pan for gold in their younger years. He enjoyed the company of animals, especially horses and dogs, and liked to be out in the quiet countryside. He was a strong man who could fix anything with some elbow grease and duct tape. He was truly one of the last real cowboys. He was preceded in death by his wife of 63 years and the love of his life, Jodine (Jody) P. Brown, and his son Johnnie R. Brown, brothers Ronald Brown and Lawrence Brown and sister Juanita Weeks. He is survived by his brothers Richard (Judy) Brown , Dale Brown, his daughter, Ronny J. Wilson, his grandchildren Nikki (Paul) Rust , Freddi (John) Christensen , Joni (John) Neal , Jamie (Jessica) Wilson , and Ray (Fabi) Wilson, as well as many great-grandchildren he knew and loved and numerous nieces, nephews, cousins, and other family and friends. Funeral Services: Thursday January 20th, 2022 Brundage Funeral Home, Dillon MT Visitation 1:30 Service 2:00 with graveside service to follow Reception after graveside service at St. Rose

The family of Fred C Brown created this Life Tributes page to make it easy to share your memories.