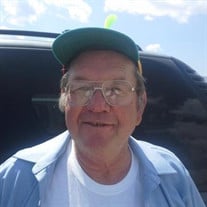 Franklin Dee Kluesner Franklin Dee Kluesner (Sr.), 76 years of age, of Lima, Montana, passed away peacefully on Saturday, July 1st, 2017, at the Missouri River Center in Great Falls, Montana, from an extended illness. Frank was born in Lima, Montana, on September 26, 1940, to William and Cora (Daffin) Kluesner. He graduated from Lima High School in 1959. He was a member of the District Champion Basketball Team that year. Frank enlisted in the United States Army serving from April 1st, 1960, to April 8th, 1963, as a motor pool sergeant in Okinawa, Japan. Upon returning home, he worked a few jobs for local employers, Lima Lumber, Ralph’s Exxon, Peat Bar, and the Snowline Ranch, before starting his own business as the owner operator of the Texaco Service Station in Lima. At that time he served as a Beaverhead County Justice of the Peace. In 1970, Frank began a career as an officer for State of Montana Motor Carrier Services Division at the Lima port of entry, retiring in 2002, after 32 years. After that Frank continued with several of his enterprises, his automotive, tire and lawn mower repair business and woodworking. Frank enjoyed the outdoors. He loved hunting and fishing, taking his children and many grandchildren along. Frank loved the Lima community and was a great supporter of the Lima Swimming Pool and Scouting. He also served as the President of the Lima Parent/Teachers Organization, and was a member of the VFW Post and Lima Fire Department. Frank was preceded in death by his infant daughter Sandra Jo Kluesner, parents William and Cora Kluesner, Brothers Ed and Joe, Sisters Gertrude, Josephine and Bernita. Survivors include wife Ada Kluesner of Dillon, Sons Frank II (Dillon), Larry (Lima), Shane/Maria (Meeteetse, WY) and Daughter Heidi (Meeteetse, WY). Grandsons Chad, Chase, Chance, Dawson and Anthony. Granddaughters Reba/Scott, Amber/Jesse, Shelby, Teresa and Great Granddaughter Brinley. Numerous brothers and sisters. The Memorial Service will be held at the Lima Community Church on Saturday July 8th, 2017, at noon, by Brundage Funeral Home with Pastor Chuck Bush officiating. There will be a reception/BBQ immediately following at the Lima Town Hall/Fire Station. Memorial Contributions can be made to the Lima Swimming Pool or Lima Fire Department.

The family of Franklin Dee Kluesner Sr. created this Life Tributes page to make it easy to share your memories.

Send flowers to the Kluesner family.