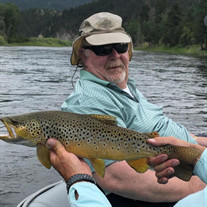 Frank MacKenzie Stanchfield, 79, of Wise River, died December 26, 2021 at St. James Healthcare with his wife Edith at his side. Frank was born on September 6, 1942 in Dillon, MT to Verne and Evelyn (MacKenzie) Stanchfield. Frank graduated from, Beaverhead County High School in 1961. Frank served in the US Army – Specialist 4th Class, 7th army, and was stationed in the Quartermaster Corps in Wiesbaden, Germany. Frank married his loving wife Edith (Rieber) Stanchfield on June 4, 1969. Frank and Edith had one son, Lance. Between Frank and Lance, a strong bond was held and many memories were shared together. Frank grew up ranching. In 1983 Frank, together with Edith, started his dream and opened Troutfitters, where one could easily say he spent the best years of his life. He guided for several years and then he and Edith turned the guide service over to their son Lance and they ran the flyshop and shuttle service. Frank enjoyed trapping and snowmobiling. He also enjoyed fishing the Big Hole and Gates of the Mountains with good friends Dave and Fred. Frank will be greatly missed by his family, friends, and the fishing community and clients. Many will remember him by the nights that were spent out in the garage, with a drink in one hand and a cigar in the other, where lots of storytelling and belly-rolling laughter took place. He truly loved to entertain everyone with his great wit and as they all said Frank was truly one of a kind. Franks legacy he left on the valley will never be forgotten. Surviving in addition to his wife and son Lance (Becky) and granddaughter Kenzie, are brother Dean (Eddie Lou) Stanchfield, sister Sharon (Marvin) Reynolds, sisters-in-law Rosemary (Richard) Wenger, Regina Maki, brother-in-law John (Michele) Rieber and numerous nieces and nephews. Frank was predeceased by his parents and brother-in-law John Maki. We will be having a celebration of life at Troutfitters, in Frank’s beloved garage, that will take place in April. A notification will come when a final date is set. Memorials may be made in Frank’s memory to St. Jude Children’s Hospital or Shriners Hospital for Children.

Frank MacKenzie Stanchfield, 79, of Wise River, died December 26, 2021 at St. James Healthcare with his wife Edith at his side. Frank was born on September 6, 1942 in Dillon, MT to Verne and Evelyn (MacKenzie) Stanchfield. Frank graduated... View Obituary & Service Information

The family of Frank MacKenzie Stanchfield created this Life Tributes page to make it easy to share your memories.

Send flowers to the Stanchfield family.