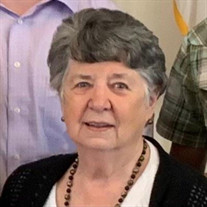 Evalina Shippee November 4, 1937 – November 26, 2021 Evalina “Willie” Shippee, passed away peacefully in Dillon, MT on November 26, 2021. Evalina was born in Aurora, Missouri on November 4, 1937 to Herbert and Jewell Glen Williams. After completing high school, she moved to St. Louis to attend nurse’s training at Missouri Baptist Hospital. She met a handsome x-ray technician named Gene Shippee and they were married on April 4, 1959 in Aurora, MO. She continued to work as an RN in St. Louis, Jacksonville, IL, and Columbia, MO. She continued her education to earn a BS in nursing, then a Master’s Degree so that she could be a nursing instructor which is the job she most enjoyed and for which she won several awards throughout her career while at Central Methodist University, The University of Nebraska-Lincoln, and Missouri Southern State College. Willie was an active church member throughout her life. She enjoyed traveling, reading, quilting, spending time with her family, friends, and her ladies’ groups (at First Baptist Church, the quilting groups, and the Y water aerobics group). She was an excellent caregiver for several extended family members, as well as for her husband. Willie and Gene were married for 62 years at the time of his passing in July 2021. She was also preceded in death by her parents, and 5 older siblings (Harold, Gene, Roy, Tom, and Elsa). She is survived by daughter Kenda (John) Madany, and son Douglas (Kim) Shippee, her 8 grandchildren: Jonathan (Courtney) Madany, Kaylyn Madany, Taylor Shippee, Joshua Madany, Rafe Diaz, Michael Shippee, Sarah Madany, and Gabrielle Diaz, and her two great-granchildren: Kinsey Shippee and Colby Madany. She is also survived by 5 siblings: Willodean, Charles (Delores), Rebekah (Rex), Martin (Garlene), and Glenna and numerous nieces and nephews. Services are being planned for Willie in mid-January where she will be interred with her family in Aurora, Missouri. Memorial contributions may be made to Barrett Hospital Home Health & Hospice via the Barrett Hospital Foundation.

The family of Evalina "Willie" Shippee created this Life Tributes page to make it easy to share your memories.

Customized sympathy cards. Mailed for you.