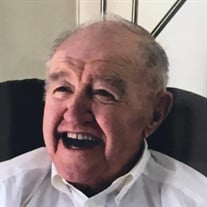 While receiving the Last Rights from Dillon’s own Father Pascal, Eugene “Shaker” Thomson passed peacefully from this life at his home on December 31. He was surrounded by family—all three children and two grandchildren. While his spirit remained strong, his body grew weak and ultimately failed in his 97th year of life. Shaker was born February 14, 1921 in Anaconda, the first of four children, to Alexander “Scotty” and Ann (Laslovich) Thomson. He graduated from St. Peter’s Catholic High School (class of 1938) and attended Montana State Normal School, currently known as UM-Western. He entered the Coast Guard in 1942 and honorably completed a 4-year enlistment. His 56-year marriage to Jean Todorovich, also of Anaconda, began in 1961 and lasted until her peaceful passing this past March. Their union produced three children, six grandchildren, and six great grandchildren. Shaker worked for the Anaconda Company for many years before pursuing what would become the first of three successful runs for Deer Lodge County Sheriff in 1966. He served as Sheriff until 1978 when the city and county governments consolidated and the position was no longer an elected office. During his tenure, the Anaconda jail had a reputation for the “best food in the area”—where he often cooked well received meals for his jailhouse guests. Family, friends, co-workers and inmates will all remember him for uncommon compassion, offering “opportunity” or encouragement when it mattered most, and for his unique ability for extended conversation—even with complete strangers—and particularly while shopping in the local groceries. In so many ways, he really was larger-than-life, and those indelible memories will live forever in the hearts and minds of current and future generations. Shaker was an accomplished bowler and golfer, reveling in his Men’s League nights at Cedar Park Lanes, Copper City Bowl and Anaconda Country Club. He enjoyed fly fishing (his favorite stream being Rock Creek), reading (many hours spent at the Hearst Free and UM-Western libraries), gardening (especially planting and growing lettuce) cooking and spending time with family. Shaker was a devout Catholic. He and Jean sponsored students who attended Anaconda Central High School before its closure in 1973. He was also a member of the Knights of Columbus Fourth Degree and served in the Color Guard. He regularly attended midnight mass on Christmas Eve at St. Peter’s Church in full dress uniform. Shaker is survived by his son Steve (Dianna) of Canyon Lake, TX and twin daughters Jan Thomson-Rouse (Todd) of Dillon and Ann Komac (Matt) of Helena. He is also survived by grandchildren Joni, Keith (Monica), Matthew (Ashley), Alyssa, Alex and Paige; and great-grandchildren Nicki, David, Samuel, Thomas, Addie and Matthew. He is also survived by his brother Jack Thomson (Laura); sister-in-law Mildred Todorovich and numerous nieces and nephews. Shaker is preceded in death by his wife, Jean; parents, Alexander and Ann Thomson; sisters, Mary Matosich (John), AnnaBelle Sladich (Joe); nephew Tom Matosich; brothers-in-law George, Tom and Robert Todorovich; sister and brother-in-law Ed and Helen Blodnick. Celebration of Life services are scheduled for 10:30 AM on Saturday, January 27 at St. Peter’s Church in Anaconda, Father Dougald McCallum officiating. A one hour visitation will precede the services. Interment of ashes follows the Celebration at the family plot in Mount Olivet Cemetery. A luncheon will be held at Holy Family Church immediately following interment. In lieu of flowers, the family requests donations be made to Barrett Memorial Home Health and Hospice (600 Hwy 91 S), Southwest Montana YMCA (75 Swenson Way), or Beaverhead County High School Booster Club (104 North Pacific)—all in Dillon MT, 59725. The family would like to thank the staff at Barrett hospital for their care and compassion shown to Shaker during his extended in-patient stay. The family offers heartfelt gratitude and appreciation to Doctors Sandra McIntyre and Tom Murray as well as home health/hospice nurses Marie, Cindy, Nancy and Debbie.

While receiving the Last Rights from Dillon&#8217;s own Father Pascal, Eugene &#8220;Shaker&#8221; Thomson passed peacefully from this life at his home on December 31. He was surrounded by family&#8212;all three children and two grandchildren.... View Obituary & Service Information

The family of Eugene Thomson created this Life Tributes page to make it easy to share your memories.

While receiving the Last Rights from Dillon’s own Father Pascal,...

Send flowers to the Thomson family.