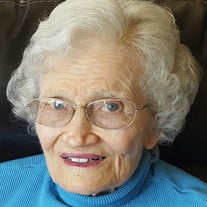 Ethel Stathem, 91, passed away peacefully at Barrett Hospital on Monday, September 5, 2016 after a brief illness. Ethel was born Millie Ethel Leap on May 17, 1925 in Imperial, Ca. Many of you knew Ethel as the lady “that was always sweeping or chopping ice in front of Wells Fargo Bank” over the past 26+ years. Ethel Stathem is survived by her daughter, Micki Martin of Pahrump, NV and Faron and Laura Stathem of Dillon, 9 grandchildren, 14 great grandchildren and 6 great great grandchildren, numerous nieces and nephews as well as extended family . Ethel was the last of “that” generation on the Stathem side and was preceded in death by Bill, her husband of 68 years, who passed away in December, 2011 and sons, Dennis and Verlen and daughter Sherry Clyne. Ethel was a hard worker who loved her garden, flowers, yard saleing and her grandchildren, she was born during the depression into a farming family in the hot, dry desert of the Imperial Valley. Bill and Ethel were married in Fresno, California in 1943 and lived “on the home place”, where the family raised alfalfa, corn, cotton and cattle. Ethel and the family originally moved to Dillon in the fall of 1957. We were recently told that “your mother was a woman of faith and integrity and that’s not found in this world today, and she never wavered in her religious beliefs. You can be proud of that.” The Stathem family would like to thank Dr Weed for her dedicated service to the family over the past 25 years. We would also like to thank Dr McIntyre, Dr Murray and the entire staff of doctors, nurses, home health providers, the emergency department and the support staff of Barrett Memorial Hospital.

Ethel Stathem, 91, passed away peacefully at Barrett Hospital on Monday, September 5, 2016 after a brief illness. Ethel was born Millie Ethel Leap on May 17, 1925 in Imperial, Ca. Many of you knew Ethel as the lady &#8220;that was always sweeping... View Obituary & Service Information

The family of Ethel Stathem created this Life Tributes page to make it easy to share your memories.

Send flowers to the Stathem family.