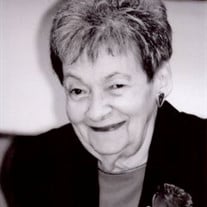 Estelle Blomquist went home to be with her Lord, May 25th, 2015.  She died at Barrett Hospital from complications of a fall.  She was surrounded by her family. Born November 5, 1929 the eldest child of RD and Cora (Berry) Marchesseault, she was raised on a ranch in the Grasshopper Valley.  As a youth during haying season she drove a team of horses, attended the Polaris School and enjoyed time with her cousin Rosemarie. During the Time of WWII, she attended boarding school in Laramie, WY.  She related stories traveling by train with the GIâ€™s and of friends made in school. February 1950 Estelle married Wayne E. Blomquist.  They purchased a ranch on Birch Creek North of Dillon where they raised cattle, sheep, and five busy children. 1964 they sold the ranch and moved to Dillon. She was deeply religious and patriotic, always concerned about the future of the nation and doing what she could do to make changes.  Estelle served many years as an election judge.  She was a wonderful wife and mother, very caring, kind and is greatly missed. She was preceded in death by her husband, parents, and granddaughter Venessa Warner. Siblings are Claire Owen, Robert (Mary), Don Jules ( Bonnie) James (Louise) and Gordon Marchesseault. Children are Sharon (Jay) Chapman, Barbara (Tom) Breneman, Doris (Mike) Banning, Daniel (Linda) Blomquist, Rosanne (George) Warner, grandchildren; Erik (Ellen) Wehler, Nikki Romero, Sara Romero, Erin Blomquist, Casaundra Warner, Steven Patrick, Kayla Patrick.  Great Grandchildren; Amora Romero, Leo Wehler, Logan Wehler, Aliece Warner, and Zhoey McEvoy, and numerous nieces and nephews. Come celebrate Estelleâ€™s life with us at Brundage Funeral Home, viewing 5 PM â€“ 8 PM on Sunday May 31st.  Services on June 1st at 1:30 PM.  Interment at Mountain View Cemetery.   Please make donation to charity of your choice.   $(document).ready(function(){ });

Estelle Blomquist went home to be with her Lord, May 25th, 2015.  She died at Barrett Hospital from complications of a fall.  She was surrounded by her family. Born November 5, 1929 the eldest child of RD and Cora (Berry) Marchesseault, she... View Obituary & Service Information

The family of Estelle Blomquist created this Life Tributes page to make it easy to share your memories.

Send flowers to the Blomquist family.