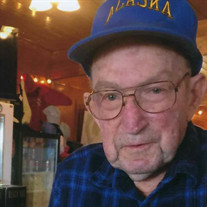 Emmett Thomas Hogan was born April 3, 1929, the first of 9 boys and 1 girl, to David Patrick and Marian Hollenback Hogan. He grew up and worked on the ranch at Gold Creek, MT surrounded by a large and loving extended family. He attended the Gold Creek grade school and Powell County High School. Emmett was a tough cowboy, even as a young boy. He contracted Rocky Mountain Spotted Fever while in grade school and then polio as a senior in high school. With his determination and hard work, not only did he beat polio and walk out of Shodair Hospital in Helena that year, but he also completed his studies and walked through commencement with his graduating class in May. Emmett married Dorothy Wilsonoff and began married life in Butte as a cattle buyer for Montana Livestock Auction. They moved to Dillon in 1960 and began raising 4 children, where the neighbors were our friends, classmates and teachers. The family enjoyed picnics at Birch Creek, fishing the beautiful streams of southwest Montana and long drives through Yellowstone Park. Loading cattle on rail cars and in semi-trailers were also part of the family activities through the years. In 1977 Emmett partnered with John Erb to buy Beaverhead Livestock Auction and his brother, Pat, worked for him at the yards. Uncle Pat became legendary with family friends in those years, a joy and great source of many adventures. Emmett worked tirelessly to build up the yards and the Livestock Auction over the next 25 years. Emmett and Dorothy worked side by side feeding cattle in fair weather as well as in forty below zero. Incredibly, they calved out around 250 head in the worst Montana winter conditions. He remembers loading cattle when the mercury didn’t rise out of the bulb. After retirement and until his health restricted his activities, Emmett was at the yards twice a day to keep involved with friends and the yards. The family wishes to thank Judy Tash as well as the management and staff of Legacy Assisted Living for their loving care given to dad over the past 3 years. Emmett was preceded in death by his parents, wife Dorothy, daughter Connie, brothers David, Jerry, Patrick, Gene and sister Mary Ann and brother-in-law Russel. Emmett is survived by children Peggy Hogan (Ray) Blize of Spokane, WA, Phil (Britt) Hogan of Ft. Myers, FL, Debbie Hogan (David) Lampert of Worley, ID. Emmett is survived by grandchildren, Bree (Brian) Hickman, Brandon (Emily) Blize, and Phil Blize all of Spokane, WA, Krista (Jeff) Cloward of Pueblo, Colorado, Ashley (Corey) Eckhoff of Alexandria, MN; Cory (Shannon) Hogan of Park Rapids, MN; Dr. Peter (Sarah) Lampert of Madison, WI; Danny Lampert, John Lampert both of Seattle, and Kathryn Lampert of Spokane. Emmett is survived by 8 great-grandchildren. Emmett is also survived by his brothers Donald (Betty) of Great Falls, Thomas (Judy) of Gold Creek, Alan (Eileen) of Spokane, WA, Sam (Linda) of Gold Creek, and sister-in-law Myrna of Tacoma, WA. In lieu of flowers, please consider donating to St. Rose of Lima Church in Dillon or a charity of your choice.

Emmett Thomas Hogan was born April 3, 1929, the first of 9 boys and 1 girl, to David Patrick and Marian Hollenback Hogan. He grew up and worked on the ranch at Gold Creek, MT surrounded by a large and loving extended family. He attended the... View Obituary & Service Information

The family of Emmett Thomas Hogan created this Life Tributes page to make it easy to share your memories.

Send flowers to the Hogan family.