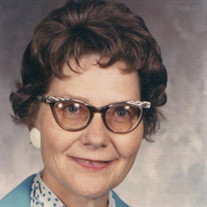 MY STORY: THE HIGHLIGHTS Ella Laden April 7, 1923 – January 4, 2018 The Early Years I was born Ella Frieda in Black Coulee, which lies nestled at the foot of the Bear Paw Mountains, near the place where Chief Joseph had his “Last Stand”. My father and mother, August and Louise Mueller, both came from Germany through Ellis Island, in the early 1900’s. They farmed 10 miles south of Chinook on about 2000 acres. We raised wheat, lots of it, and oats, barley, and flax. Our cattle ranged on Tiger Ridge. I was the middle one, the 5th in a family of 9 children. We had pigs, chickens, geese, turkeys, and lots of chores—cows to milk, garden to hoe, and always the shelter belt to weed. We played games like “kick the can”, “last couple out”, “pump-pump pull-away”, marbles, hop scotch, checkers, and tag. Life was good! Several memorable highlights include when I was about 10, I took a trip. I went with our neighbor, Anna, to Chinook, in the team and spring wagon. Wagons and buggies were not the same. It was an all-day trip. It was July 3rd. Anna got some thread and notions. Then we went to the ice house where a man dropped a big chunk of ice into a tub, which was covered. Then on July 4th, we had homemade ice cream. My it was good! Then one 4th of July, we were in Chinook for the Big Parade. We each had an ice cream cone and a bottle of orange Crush. Life was good. You see, Papa had a trade, he was a builder and stone mason. So he was able to build chimneys, plaster, etc. He took jobs, so we were never as poor as some people. We never took welfare. So much for the 30’s. School Days Then there was school. In the mornings, we stood-up, faced the flag, said the Pledge of Allegiance, said a prayer to God to bless our nation, our leaders, our school, parents, teachers, and students, then we sat down and classes began. My first 3 years we rented a small house in Chinook. The next year we rode a cracker-box-like school bus. My feet still have chilblains from when they were frosted in the bus. Girls wore long brown stockings, and dresses, and the boys wore pants. We had lots of sweaters. One day we got to school and it was -52 below zero. We were sent home. Then we were home-bound for 3 weeks due to the snow. I achieved in school. I did well and graduated in 1941, as class valedictorian. I was ready to take my place in the world and make a difference. You remember the days when you knew everything. Life was an oyster and you were the pearl. Life was great! Ah, the enthusiasm of youth! The Middle and the Long Haul December 7th, the war came. It changed the world, our land, and everything. After graduation I had $50.00 from my parents. I set out for Dillon Normal College in Dillon, Mt. Another sister had settled there. I had a scholarship and I was the valedictorian, wasn’t I? So to school. I did a year. Romance bloomed. Was hysteria love. My schooling was to be put on hold until later. I met and married a tall, lean Irishman, John Laden. We farmed South of Dillon on an irrigated hay and cow set-up. Life was good. We were blessed with 3 children-Jack, Donnette, and Timothy. We did all the things involved in growing up—sports, clubs, projects—everything. We weathered the Mountain peaks and valleys. We serve a mighty God. I went back to school and got my Master’s degree. I taught in the Dillon Elementary schools for 30 years. Life was great! We did everything—winter skiing, swimming etc. Then in 1980, John had cancer and died. Timothy interrupted his dreams to take care of his dad. Tim was going to Bozeman to become a veterinarian. Somehow he slid into the role of taking care of the farm and me. The others grew up and left. Life was again good. Loving the Beaches Romance again, this time I married an engineer, Les Fultz of Lincoln City. We lived right on the ocean in Neskowin, Orgeon. It was beautiful. We explored the West coast from Canada to Calif. I loved the beaches and spent many hours there collecting sand dollars. The good years passed. We got old. After, Les passed away, I returned to Dillon, Mt. The Last Chapter Eventually I ended up in Scranton, N.D. Here I found wonderful people who made life again good. You all have been so good to me. Thanks. I would say, embrace life-live each day fully and gratefully. Life is a precious gift. Love God. Love People. April.

MY STORY: THE HIGHLIGHTS Ella Laden April 7, 1923 &#8211; January 4, 2018 The Early Years I was born Ella Frieda in Black Coulee, which lies nestled at the foot of the Bear Paw Mountains, near the place where Chief Joseph had his &#8220;Last... View Obituary & Service Information

The family of Ella Laden created this Life Tributes page to make it easy to share your memories.

Send flowers to the Laden family.